The Young Americans for Freedom (YAF) was founded in September 11, 1960 with the help of William F. Buckley Jr. The movement was a conservative youth student movement. It originated in Sharon, Connecticut, in Buckley's home. This is where they would adopt the Sharon Statement which is the founding document of the YAF and basically outlined this group's platform. YAF supported free market economics, supported states rights, and supported limited government. They had a strong stance on U.S. as a nationally sovereign country and defeating communism rather than coexisting with it. The YAF was a strong movement in promoting conservatism during this time and is still very active on college campuses throughout the country today. 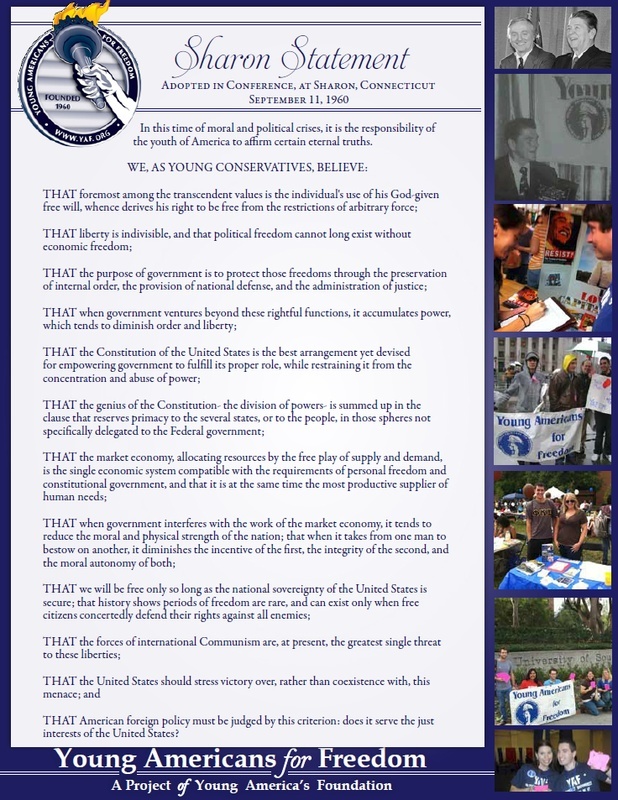 The Sharon Statement was drafted upon the foundation of the Young Americans for Freedom in 1960 at William Buckley Jr's house. This statement was basically their founding document and provided a set of rules or guidelines for members of the movement. The Sharon Statement states what the group as young conservatives should believe in. It is highlighted by beliefs such that political freedom cannot exist without economic freedom, conservatives should believe in a free market economy, and that Communism is a threat to American liberties and needs to be dealt with, stressing victory over Communism and did not believe in coexisting with it. It was a statement of faith and conviction.  The Sharon Statement remains today to guide new and old members of the Young Americans Foundation. 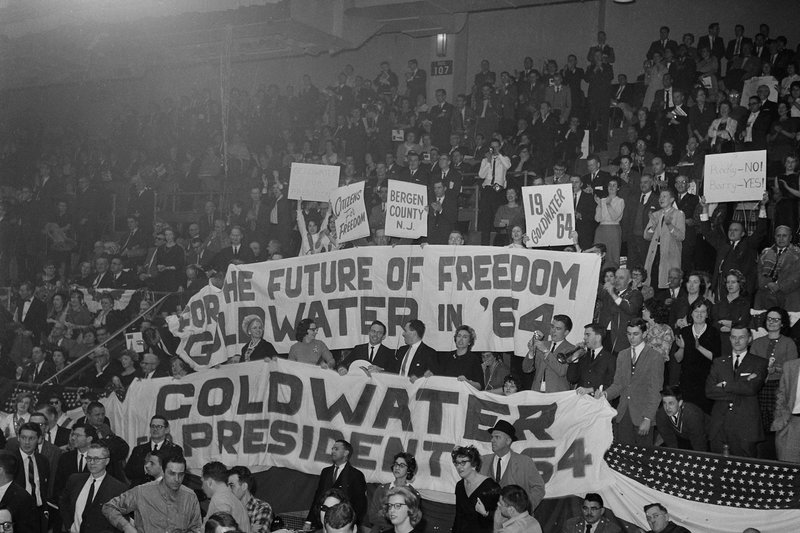 Rally For World Liberation from Communism

On March 8, 1962, nearly 18,500 conservatives staged a huge rally at Madison Square Garden. This large public response reflected the growing strength of the conservative movement. The rally was originally designed to demonstrate Young Americans for Freedom independence from more extreme conservative groups. The rally's greatest success was that it filled the Garden for no reason other than to celebrate the ideology of conservatism. One weakness was the wide range of individuals honored there. The list included conservative philosophers, moderate conservatives, radical conservatives and actors like John Wayne. However, because of the radical conservatives, some guest speakers like Senator Thomas Dodd withdrew, calling it a "partisan gathering with extremist coloration". One of the honored guests who took full advantage of the rally was Senator Barry Goldwater of Arizona. He was thrown onto the national scene after the rally. Twelve hundred anti-conservatives picketers demonstrated in an orderly fashion outside the Garden. Later they joined 1,800 others at a counter rally in St Nicholas Arena that had been called by Americans For Democratic Action and College Young Democrat groups. 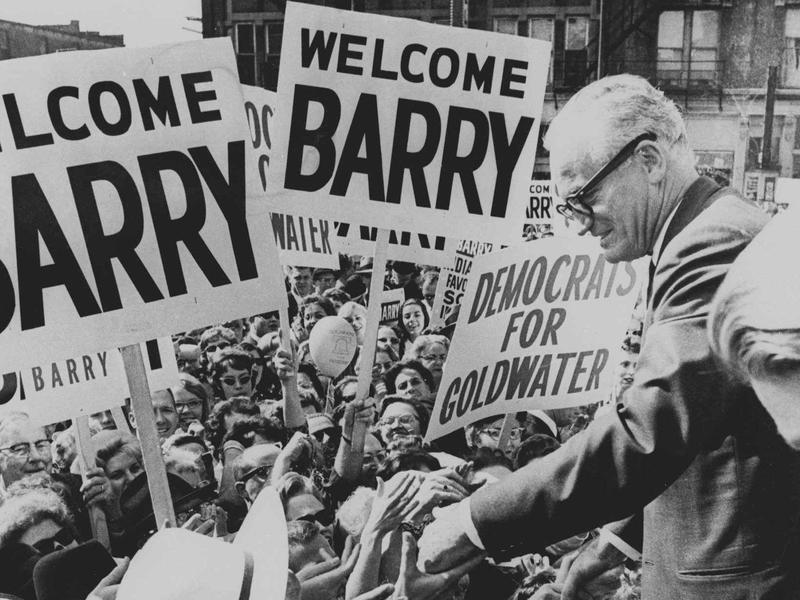 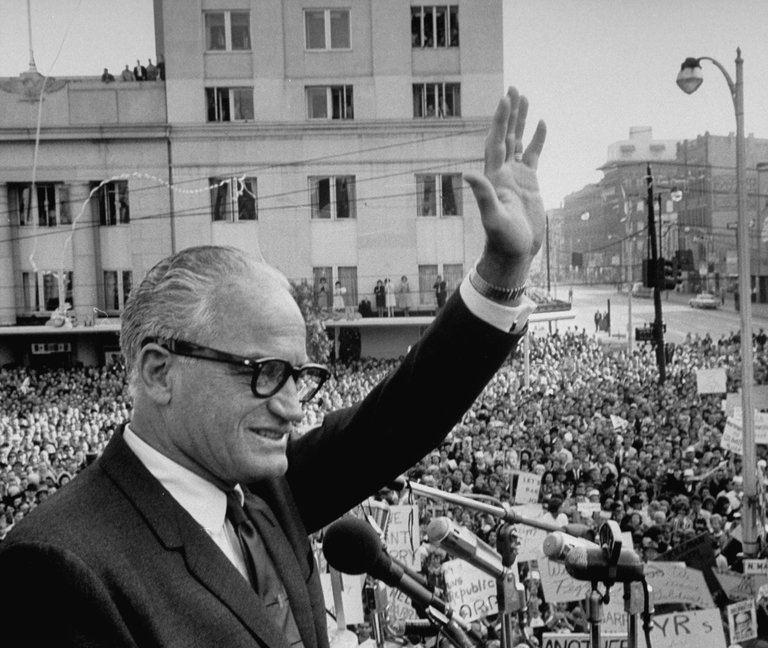 After the Rally for World Liberation from Communism in 1962, Barry Goldwater was a well-known name in conservative homes. Even being nationally known Barry Goldwater's presidential campaign in 1964 shocked, puzzled, and intrigued political and rhetorical analysis of that time. The Arizona conservative had consistently violated perhaps the most fundamental axiom of campaigning, by ignoring or even arguing against the obvious needs of many audiences he addressed. After he lost the election by the largest margin and total vote in American presidential elections to that time, close observers offered a wide range of explanations for his rhetorical failures: e. g., Goldwater sought not to persuade the general electorate but to move his party's ideology to the right or its geographical center to the West, conceding the election as unwinnable against a popular incumbent in a period of economic prosperity and political dominance by liberalism; or Goldwater lacked intellectual and other capacities, his advisers were inexperienced political amateurs, and consequently he was rhetorically insensitive or inept. Even though he suffered a crushing defeat Young Americans for Freedom did not desert him. In fact in San Francisco on July 19, 1974, Young Americans for Freedom pay Tribute at their biennial political conference to their fallen hero. Where 10 years ago he won the Presidential nomination decisively after a bitter intraparty struggle. Goldwater knew the importance of inspiring and reaching out to young people, which is why he worked with Young Americans for Freedom throughout his career. Goldwater said: “My speaking schedule is heavily loaded with commitments to speak with college groups. They seem to want me, and I love to go. I love to go because I want to know what the future holds for mankind in the years ahead. And believe me, my friends, today’s Young American for Freedom leaders are tomorrow’s national leaders. I know this because I see it happening all over the nation.”

This is a speech where Ronald Reagan addresses the Young Americans for Freedom in 1975. He basically lays out what a Republican platform should look like and discusses what young conservatives should stand for politically. 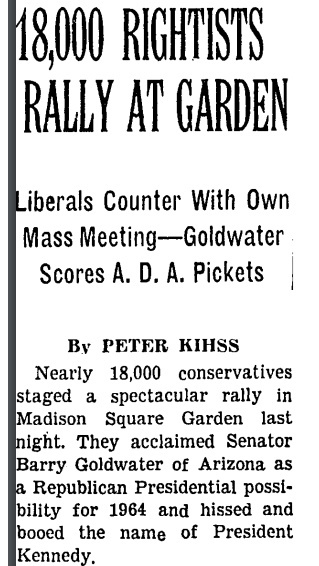 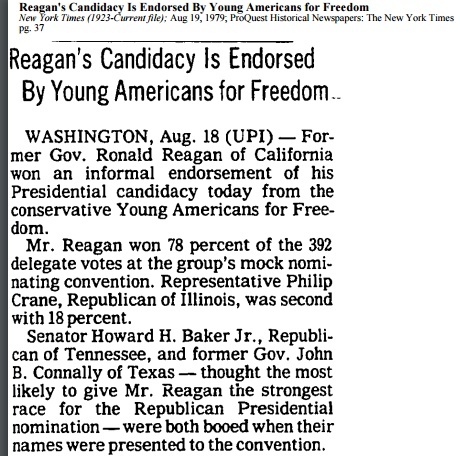 One of the main ways the Young Americans for Freedom helped promote the conservative cause in the 1960s- 1970s was by supporting conservative presidency campaigns. YAF would have a common goal to see the nomination of a conservative Republican presidential candidate. They primarily did this through their support of Barry Goldwater in 1964 and Ronald Reagan in 1979. The YAF would hold rallies like the one in 1964 at Madison Square Garden for candidate Goldwater, where many would show their support. This was a very impactful rally as it consisted of a gathering of 18,000 conservatives. The YAF was attracted to Goldwater for his conservative politics. Although Goldwater did not win the presidency, the work of the YAF really helped put him in the spotlight, even though he would be defeated badly in his race with President Johnson. However, the work of the YAF in the 1964 campaign led a resurgence in American conservatism. The YAF would also support Ronald Reagan. They would endorse him as a presidential candidate in 1968, 1976, 1980, and 1984. The YAF's support of Reagan really helped his campaign and led to a successful nomination from the Republican party and led to a successful nomination in the election of 1980. Reagan's endorsement from the YAF really helped separate him from other replubican nominees. This article showed that by this date that Reagan had won 78% of the delegate votes in a mock nomination and the closest to him was Phillip Crane with 18%.

"Operation Abolition" was a film for young conservative activists in the early 1960s. Young Americans for Freedom often recruited new members after public viewings of the film.

The Young Americans for Freedom movement was a strong movement for the conservative cause throughout the 1960s and 1970s. They supported conservative beliefs and tried to make others knowledgeable of the conservative cause on college campuses.They were successful in hosting rallies and conferences and they still have an annual conference that meets today.  The YAF group helped contribute to a resurgence of conservatism in politics throughout the 1960s and 1970s. The Young Americans for Freedom group is very active today on college campuses which show the effect they have had throughout the later 20th and early 21st century.

Andrew, John A. The Other Side of the Sixties: Young Americans for Freedom and the Rise of Conservative Politics. New Brunswick, N.J. Rutgers University Press. 1997.