A Good Day to Die - Trailer

A Good Day to Die - Trailer

In 1968 the abused, neglected and repressed American-Indian people fought back. From the depths of despair Dennis Banks, co-founder of the American Indian Movement (AIM), led his people into confrontation with the government and changed their lives forever. A stirring account of the forgotten Indian civil rights movement, this documentary recounts not only the struggle but also depicts the terrible repression they endured.
"I was crying and I was yelling. The kids didn't want to go." Dennis remembers the first time he felt the American repression against American Indians, when he was forced to go to boarding school for "cultural assimilation". Taken away from his family at the age of 5, he wouldn't be allowed to return home for four years. "You couldn't relate to your Indianness" he explains. If someone was caught speaking their native language, they would be violently punished.
Inspired by feminist, anti-war and civil rights movements that were taking place at the time, Dennis began to be more and more interested in how he could bring about a change for native people. On July 28th 1968, he gathered other American Indians to talk about the problems they faced, such as severe police brutality, unemployment and slum housing. "I felt we hit on a nerve", Dennis explained; "People were striving for change". Clyde Bellecourt, also an AIM co-founder, explained that the only solution was to "use confrontational politics". This meeting marked the beginning of AIM.
From this moment on, AIM was to face multiple battles to be able to achieve the change the movement was pursuing. From the siege of the Bureau of Indian Affairs in Washington D.C in 1972 to the occupation of Wounded Knee, South Dakota in 1973, the movement faced a tumultuous struggle. One of the most decisive moments in the AIM struggle was the aftermath of the murder of a young American Indian.
Although it was proven the act was premeditated, the murderer, a non-native, was not charged for murder. This is when Dennis said his famous words and the real battle against injustice started: "We will not tolerate any more abuse" he proclaimed. "This is where it started, and this is where it's going to end. It's a good day to die."
This inspirational documentary is a powerful insight into the modern day struggle of the American Indians while following the life of one of the community's most important figures; Dennis Banks. Speaking about his part in a lifetime of repression and struggle, Dennis humbly concludes, "I will go to my grave knowing that I tried my part to bring about meaningful change. I did my very best". 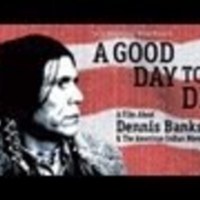