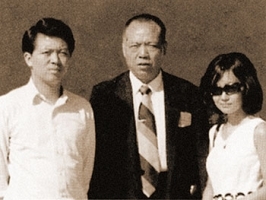 Andrew Cherng (left), Ming-Tsai Cherng (middle), and Peggy Cherng (right) at the opening of the Panda Inn in California. 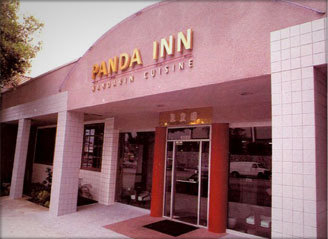 Panda Express is a subsidiary of the Panda Restaurant Group, Inc. The Panda Restaraunt Group was founded in 1973 by Andrew Cherng and his father, Ming-Tsai Cherng. Their first restaraunt chain they opened up is Panda Inn, in Pasadena, California. This was more formal, sit-down dining, contrasting the fast food nature of Panda Express. The restaraunts are also only located in California.

In 1982, Peggy Cherng, Andrew's wife, joined her husband in the restaraunt business. In 1983, through their connections with then-UCLA football coach Terry Donahue, the manager of Glendale Galleria invited them to make a fast food version of Panda Inn for the mall. Since then, Panda Express has spread all over the United States, and even have restaraurants in Mexico, Canada, South Korea, and United Arab Emirates.