On the backside of West Hill, there is a graves plot much older looking than the surrounding gravestones. A duel gravestone lies in this spot, belonging to Thomas and Clarissa Evans. The gravestone was placed there by their grandson J.H. Beusse. Thomas and Clarissa were born in Wilkes County, though eventually finding Athens their home. Thomas was born in 1786. He was injured fighting for his country in the War of 1812. Thomas and Clarissa had thirteen children together. Many of them are buried in Oconee Hill with the families they married into. Two of which are the Beusse and Willliams families, which two of their daughters married into. Thomas died on April 10, 1861. Clarissa was able to draw on his war pension until her death in 1888. Thomas was originally buried in the old cemetery on Jackson St. Eventually Thomas and his wife were moved to West Hill in Oconee Hill Cemetery. They are located at the same plot as their daughter, Martha J. Evans Williams and her husband Thomas D. Williams. 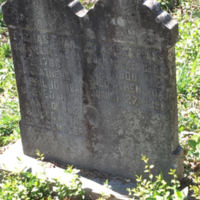