Colonel Samuel P. Thurmond was born April 2nd, 1820, and died July 15, 1887. Samuel Thurmond was a Civil War veteran, a respected member of his community, and a highly successful lawyer. He was reputed for his honest and charismatic nature, and was apparently one of the most popular people in Athens. His trustworthy reputation and his determination in all areas of his life left him among Athens’ wealthiest and most successful, and was estimated to be worth “more than one hundred thousand,” at the time of his death in 1887. Colonel Thurmond died of Bright’s disease, as a result of a fatal kidney infection, in the comfort of his Athens residence. Samuel Thurmond was married to Elizabeth Amanda Long Thurmond, and had two daughters, Sallie and Carrie. The family shares one of the most desirable plots in the cemetery, as it has Sanford Stadium as its immediate backsplash. Samuel P. Thurmond will be remembered for his success in the courtroom, and his aptitude for social interaction. 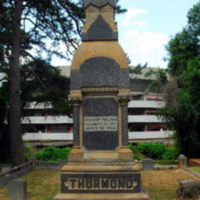