Asaph King Childs, who was born on December 9th, 1820 in Springfield, Massachusetts was a well-known merchant and jeweler in Athens, Georgia. He is the founder of National Bank of Athens and Athens Hardware Company. He was also a Confederate veteran in the Civil War. Although he did not die in the battlefield and it is unknown of how he passed away, Childs died in July of 1902. His grave is located at the Oconee Cemetery of Athens, GA -- along with his wife, Susan Ingle Childs, and other Childs family members. Asaph Childs with his brother Otis, worked as silverman and jeweler in Milledgeville, GA from 1835 to 1846. Then, for a year, Childs moved to Athens, GA -- where he and his fellows mates partnered to open Hardware stores: “Two music shops and a photography studio, groceries and clothiers, and numerous other new ventures began.” Thanks to people like Asaph, small businesses grew in Athens than ever before the Civil War. From then on, Asaph continued to reside in Athens with his business and involvement in real estate and banking. One of the fascinating things about Asaph’s grave memorial is the burial with all his related families. All the Childs family members are buried together in the same space. Furthermore, the family’s grave site has a distinct memorial statue -- a female figure holding a long cross. With Childs’ involvement in the Civil War as a Confederate veteran and dedication towards the city of Athens business, perhaps the family’s grave site includes sophisticated memorials to honor the family. 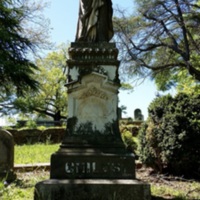