William Anderson Bain was a veteran of the Civil War, killed in Athens while working as a pattern maker at the Athens Foundry.

William Anderson Bain was born on September 2nd, 1827 in Poplar Hill, Baltimore Maryland. Both of his parents were from Scotland. He moved south and married Mary Ann DeCosta on September 18th, 1856 in Athens, Georgia. He was elected to serve as the Second Corporal for a volunteer company of the Confederate forces in March of 1860. After serving in the Civil War he was ranked as a First Sergeant. In After the war William Bain worked as a Master of Patterns. In 1880 he and his wife Mary had 10 children. From oldest to youngest they were Sarah Elizabeth Bain, Calhoun A. Bain, Nina A. M. Bain, Leiola A. Bain, Fred N. Bain, Henry D. Bain, Katie Lowery Bain, Frank Bain, Daisy Bain, and Edna Baine. In September 1882, William Bain died while working as a pattern maker at the Athens Foundry. While working to extend the foundry a 75lb stone blasted through windows near the top of the building and hit William Bain, killing him instantly. He was 54 years old. He is buried in plot V 16 of the Oconee Hill Cemetery in Athens, Georgia. A Southern Cross of Honor is displayed on his grave, along with his ranking of First Sergeant. His children Sarah Elizabeth Bain Mize, Frank Bain, Henry D. Bain, Katie Lowery Bain Cunningham, Edna Bain Short, Nina Bain Vess, and Daisy Bain Wilson are also buried at Oconee Hill. 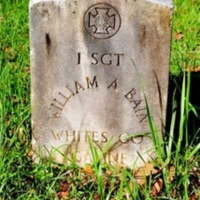