Colonel William G. Deloney founded and commanded a cavalry company in the Cobb Legion of the Army of Northern Virginia from 1861-1863, before being killed in action.

Colonel William Deloney raised a cavalry company in Athens, GA, in 1861 with the intent of joining the new Cobb Legion, or Georgia Legion, which was part of Robert E. Lee’s Army of Northern Virginia. Deloney was named commander of Company C, and later his entire battalion, and continued in these roles until the time of his death. Deloney was seriously injured at Gettysburg after a receiving a sword blow in the face. Upon his recovery, Deloney joined his old units just a few months later and was again wounded, this time at Jack's Shop, Virginia. In this skirmish, General Jeb Stuart was surrounded by Union forces and managed to break through back to Confederate lines, but Col. Deloney was left on the field after being shot in the leg. Captured by Union forces, he was brought to a hospital in Washington, D.C., but died of his injuries just a few days later, most likely due to infection. His remains were brought back to Georgia, and buried in Oconee Hill Cemetery in Athens, where he was originally from. His gravestone was paid for by his former comrades after the end of the war. 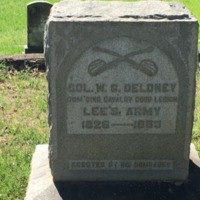