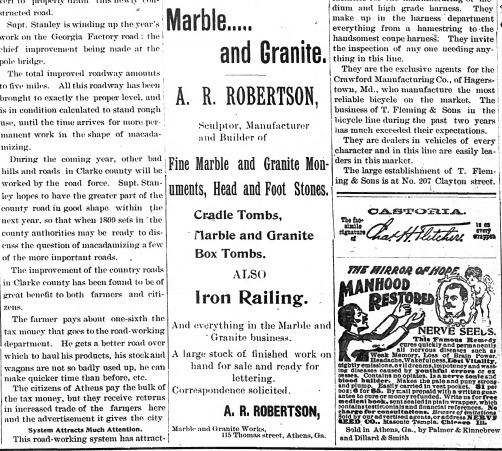 Out of the eighteen stone masons identified from the cemetery, eight were from Georgia and the other ten were from various states along the east coast. Most Georgian based stone masons lived in or near Atlanta and Madison, but one mason, A.R. Robertson was from the Athens area. [1] As seen in his ad, A.R. Robertson solicited business from his workshop located at 115 Thomas Street and incorporated popular decorative elements in his work like cradle tombs and iron railing. [2] 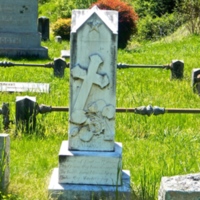 The cross vault obelisk was another variation of the traditional obelisk. 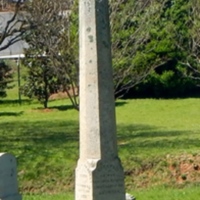 The Obelisk is originallly from egyptian culture, yet has been adopted by many different cultures and societies, which in turn has brought multiple forms of interpretation and meaning. Overall the symbolic meaning of an obelisk is to represent wealth, higher social status, and a closeness with a higher power the taller the Obelisk is. 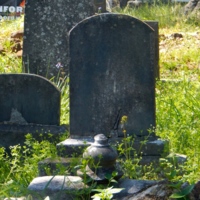 The tablet style was an affordable, manueverable, and popular style for most families in the mid to late 19th century. There's no specific menaing behind the type of headstone. 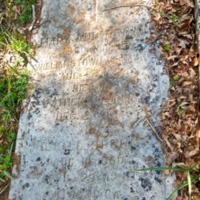 Lawn type became popular after the tablet style for its affordable nature. Also, it was easily made and allowed for little maintenance. 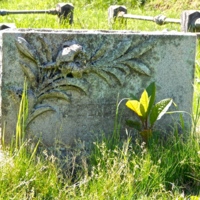 Block style was an easy and simple form of headstone. It was made from a simple cast mold and provided a blank canvas for the artisits and families to add to. 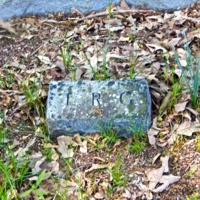 An affordable grave marker, it ususally would be part of family plots to identify which member of the family was buried. A larger tombstone with the families last name would be placed at the head of the plot for all members of the family. 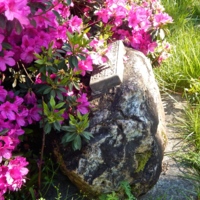 Emerging stone gravemarkers would consist of an uncut piece of stone, usually granite. A small tablet piece, cut with the name and dates of birth and death, would be placed on top of the uncut stone. This type of grave marker was meant to like more ancient and have a closeness with the earth through its lack of human change. 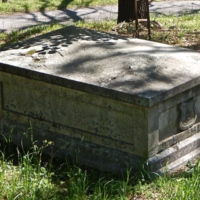 The sarcophogus is associated with Greek, Egyptian, and Roman cultures. There is usually an inscription marking the deceased on at least one side of the tomb.

← The Rural Cemetery Movement
Gravestones and Symbolism →
Masons and Stonework