The grave markers in Oconee Hill Cemetery demonstrate a number of important historical trends that helped to shape American culture and popular conceptions of death and the afterlife. By observing these trends and their origins, we can establish a better understanding of the styles and symbols that became common during the Rural Cemetery Movement.

Following the Great Awakening that began in the early eighteenth century, popular American religious sentiment underwent a dramatic shift in popular conceptions and rituals surrounding the afterlife. Moving away from more traditional Puritan motifs, which tended to feature straightforward images of mortality and death, this changing religious tide gave way to images of a hopeful afterlife, idealized as a peaceful and eternal slumber. The physical manifestation of this shift can be seen in the incorporation of angelic figures and hands reaching down from heaven, indicating a process of spiritual ascension after death. This transition marked a fundamental change in what American gravestones were intended to communicate, as they became more comforting for the living rather than purely indicative of human remains.

Contributing to the gradual transition of American cemeteries, the influence of Victorian culture was especially important to the development of the Rural Cemetery Movement. Borrowing from European precedents, American cemeteries began to reflect the romanticism that accompanied Victorian culture. Moving away from strictly religious symbols, American cemeteries began to incorporate a wide variety of natural imagery, such as ornate flowers and decorative animals. While used to communicate something about the deceased, these decorative elements were also intended to comfort the living, providing them with a sense of solace in the face of death. Though clearly commemorative of the dead, this romanticism was an integral aspect of the cemetery’s emotional and spiritual function amongst the living.

The Incorporation of Classical and Egyptian Decorative Motifs

Another important consequence of European influence, the incorporation of Classical and Egyptian symbols became a characteristic feature of Rural Cemeteries in the United States. Following the excavation of large archaeological sites in the Mediterranean and the Middle East, Western culture began to experience a renewed sense of fascination with ancient civilizations. Consequently, a variety of Classical and Egyptian aesthetic elements became popular architectural styles in Europe and the United States. Associated with peoples and persons who lived long ago, these ancient design motifs were associated with a sense of permanence and perseverance to time, making them especially well suited for the purposes of rural cemeteries in the United States. 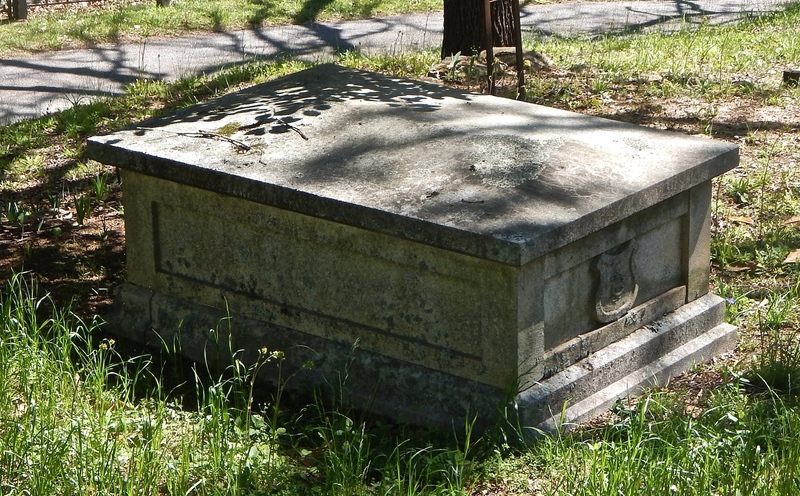 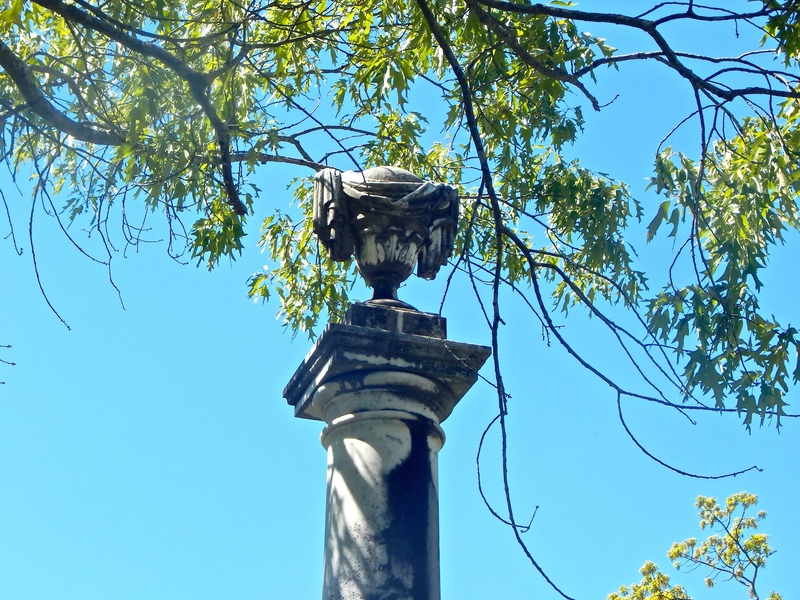 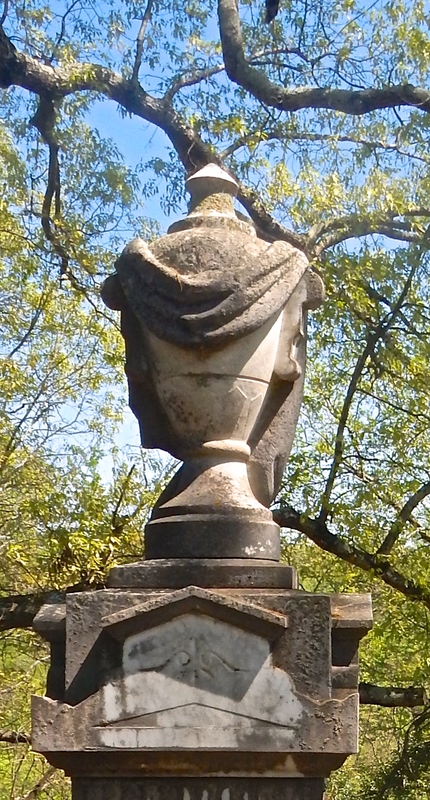 A widely influential architectural style in the United States, the aesthetic of the Early Classical Revival also proved impactful in the development of American cemeteries and mortuary motifs. Laden with associations to the legacies of Ancient Greece and Rome, the incorporation of Classical motifs was deeply connected to the national identity of many Americans living in a young republic.[1] An immensely popular sculptural style during the Rural Cemetery Movement, common manifestations of Classical influence include the willow and urn motif, the use of columns, and the construction of mausoleums and sarcophagi in the style of Ancient Greek and Roman temples. Though they often appeared together, willows and urns were also utilized individually. With its leaves and branches falling towards the ground, the physical structure of the willow tree suggests some sense of sadness or mourning, making it both beautiful and tragic. In contrast, the urn stands up right and points towards the sky, often positioned atop a large rectangular gravestone, with strong, geometric lines. Though the use of urns dates back to Classical civilizations, cremation was extremely uncommon in the United States during this time, thus the urns that appear in rural cemeteries are entirely decorative, and in no way functional.[2] While it may seem odd that the sculptural reproduction of funerary urns was so popular within a society that had no practical use for them, the prevalence of urns in the Rural Cemetery Movement speaks to the weight of Classical influence at the time.

[1] Stanley French, “The Cemetery as Cultural Institution: The Establishment of Mount Auburn and the ‘Rural Cemetery’ Movement,” American Quarterly 26, no. 1 (1974): 49. 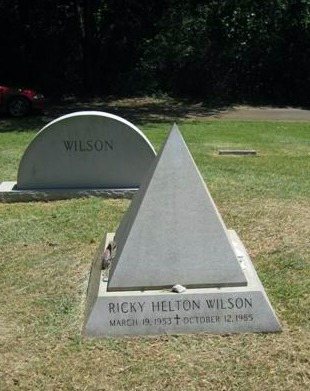 Drawing on influences from a wide variety of people and places through time and space, the mortuary symbology that developed during the Rural Cemetery Movement proved to be highly eclectic. This is especially apparent when considering the frequency of Egyptian Revival architecture and design within American cemeteries during the nineteenth century, which may appear somewhat odd without further investigation. Though seemingly exotic, Egyptian Revival structures were not actually adopted directly from Egypt. Rather, the use of Egyptian motifs in the United States was an extension of their existing use in Europe, where they were frequently utilized for monument building in urban areas.[1] Though pylons and pyramids can be found with some frequency throughout rural cemeteries, they pale in comparison to the immense popularity of the obelisk. Ranging in size and ornamentation, obelisks employ stark geometric lines and a strong vertical orientation, pointing upwards towards the heavens. Though tall and slender, obelisks are visually striking, and they often dominate the sculptural landscape of rural cemeteries. Speaking to the wealth and prestige of the deceased, the ancient connotations of the obelisk also work to suggest a sense of impermeability to the affects of time.[2] As with the Classical Revival and the incorporation of more romantic symbolism in rural cemeteries, the use Egyptian monuments helped to console the bereaved by crafting a comforting narrative of permanence in the face of human mortality. 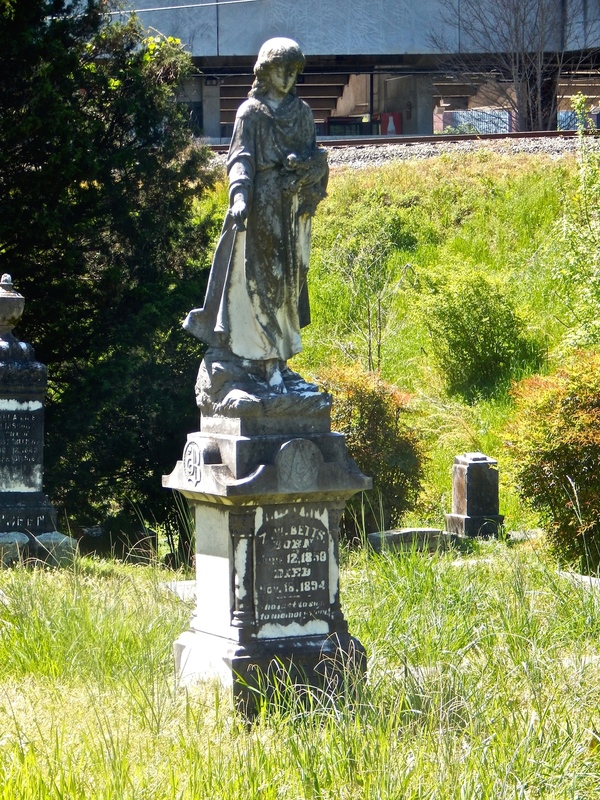 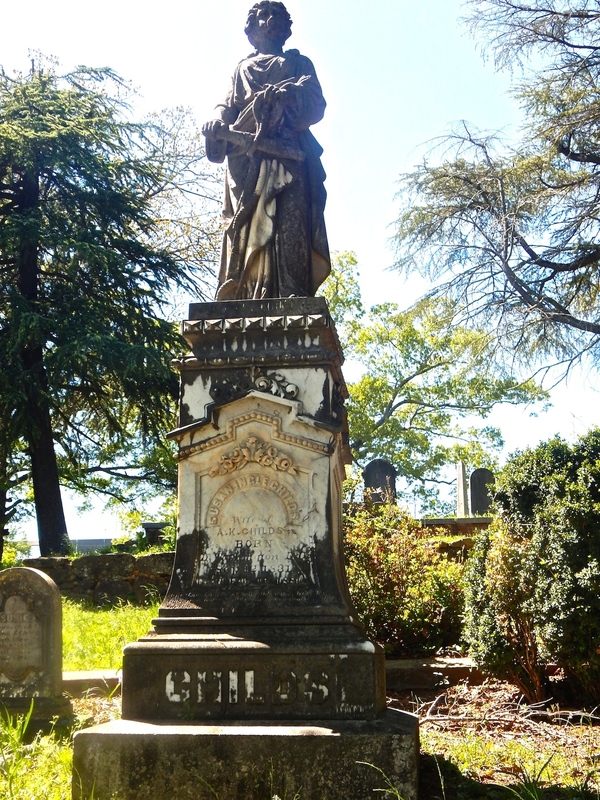 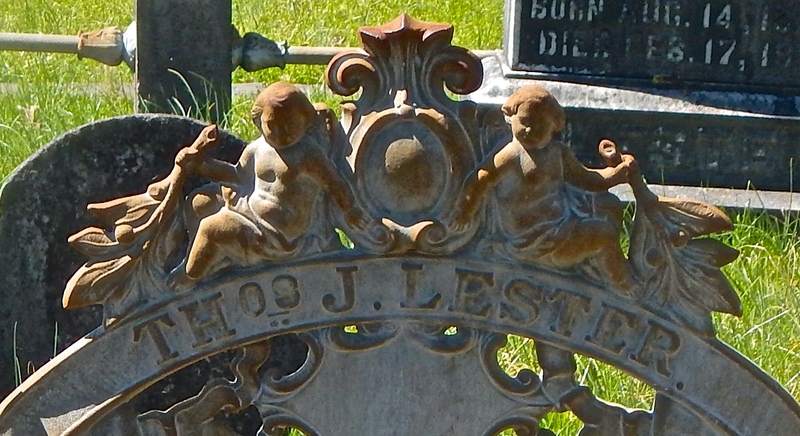 Seeking a source of comfort in their time of mourning, popular notions of Romanticism and changing religious sentiments played important roles in how Americans sought to manage their grief and remember the dead. Becoming increasingly common in the latter half of the nineteenth century, sculptural depictions of angels and female forms “indicat[ed] a growing emphasis on consolation rather than commemoration,” as these figures were often envisioned as stewards of the deceased, “easing their transition, carrying their souls to heaven, and conveying a message to the bereaved.”[1] Though these figures clearly display the desire of loved ones to honor the dead, their decorative and symbolic function was intended to serve the living.  While they may seem commonplace today, the adoption of angels was a fairly remarkable development at the time. As the Rural Cemetery Movement was largely a product of the Protestant community, these popular angelic figures were born out of Catholic religious imagery.[2] Thus, their incorporation seems unlikely in the face of anti-Catholic sentiments that were common at the time. Though it may seem surprising, the popularity of angelic figures grew from a number of sources. For one, the growing popularity of Christian consolation literature helped to solidify the cultural potency of angels in the afterlife. From another angle entirely, the adoption of angelic and female figures was also a reaction to the growing popularity of Classical and Egyptian styles, which many Americans viewed with skepticism on account of their historically pagan associations.[3] 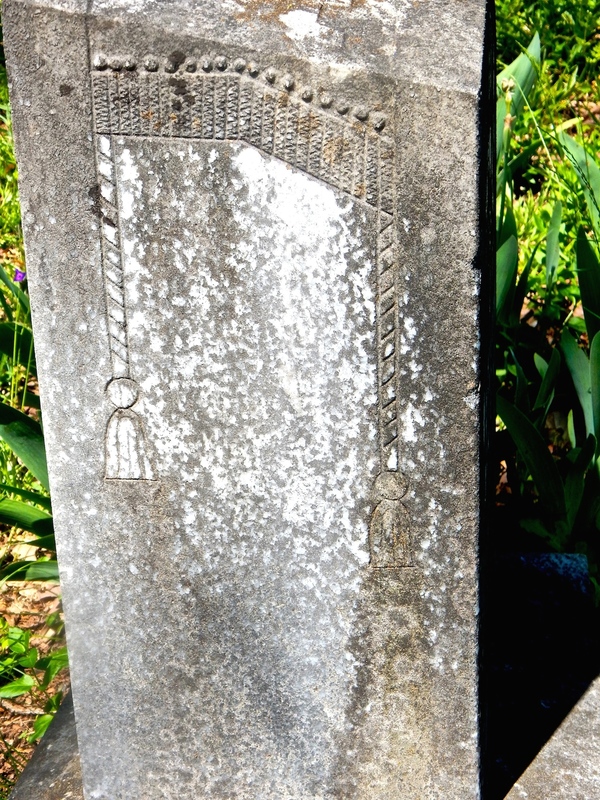 In early America, home funerals were a common practice. In particular, visitation was often held in the front parlor followed by a procession to the church and cemetery. In this time, when most families typically cared for their own dead and bodies were laid to rest in the parlor, it was often customary to adorn the room with black, as a sign of loss and morning. Draperies, synonymously referred to as curtains, veils, or palls, were often used to decorate the room for those past. Although typically black, these draperies were much more than a simple shroud or a mere cloth. During the Victorian era, when public cemeteries evolved and people began giving importance to gravestones as a means to memorialize the dead, the design and symbolism of tombstones became much more elaborate. This idea of draping, originally associated with parlor room visitations, thus extended to the craftsmanship of gravestones. After the body is buried, the carved draperies serve as a lasting sign of mourning and grief, similar to the physical draperies left to embellish the parlor room after the body was taken out. Often associated with the covering of obelisks and urns, draperies serve as a lasting reminder of those who past. Their beauty and intricacies serve to characterize the beauty of life, while their lasting presence and usage as a veil serve to symbolize both mourning and mortality. 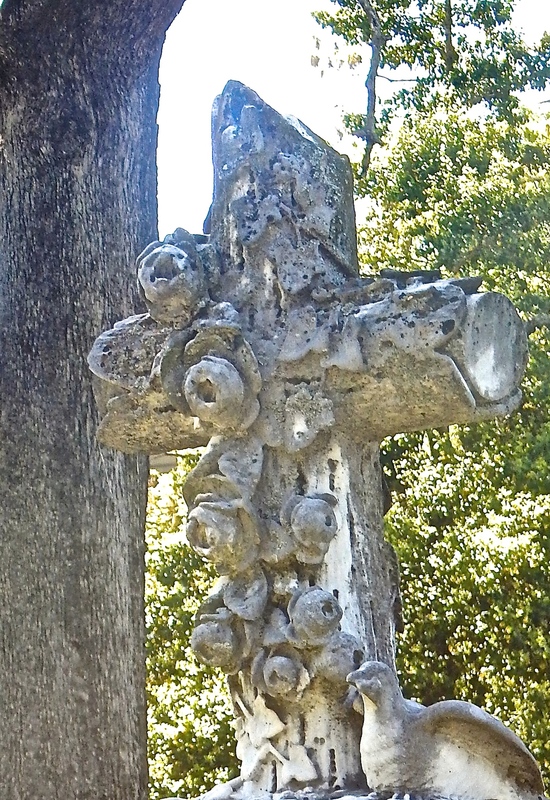 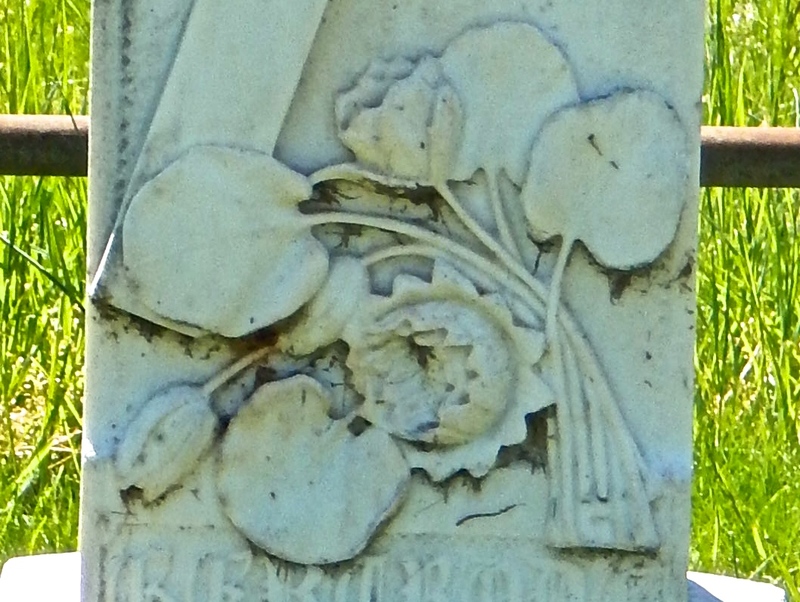 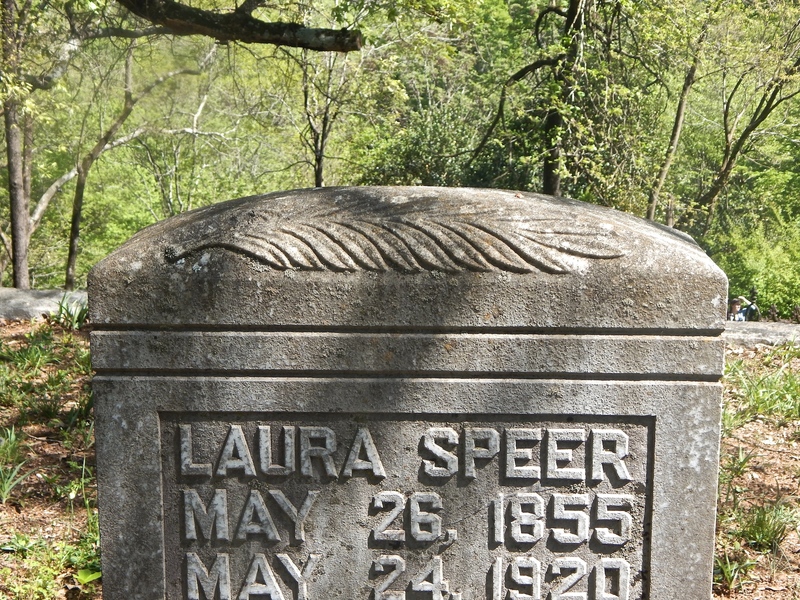 Symbolism of Plants and Flowers

For centuries, bereaved loved ones have used flowers to decorate the graves of the deceased. While many people today choose flowers for their natural aesthetic, traditional practices often attributed with a much deeper symbolic significance to use of floral imagery, and many felt compelled to immortalized these natural symbols in stone, preserving them for generations to come. Variations of floral symbolism are abundant in Oconee Hill Cemetery, and headstones often include intricate sculptural work depicting plants such as ivy, lilies, and palm fronds. Prominently displayed on numerous headstones throughout the cemetery, each of these examples is heavily laden with nineteenth century symbolic associations. Lilies, for example, were used to symbolize the deceased person’s purity and innocence.[1]Ivy, another common example in rural cemeteries, is used to indicate friendship.Carved as though it is growing around and clinging to the headstone, images of ivy suggest an eternal embrace, immortalized in stone. Also found frequently throughout rural cemeteries, engravings of palm fronds were used to signify victory and immortality, also providing a sense of comfort for the bereaved.[2] 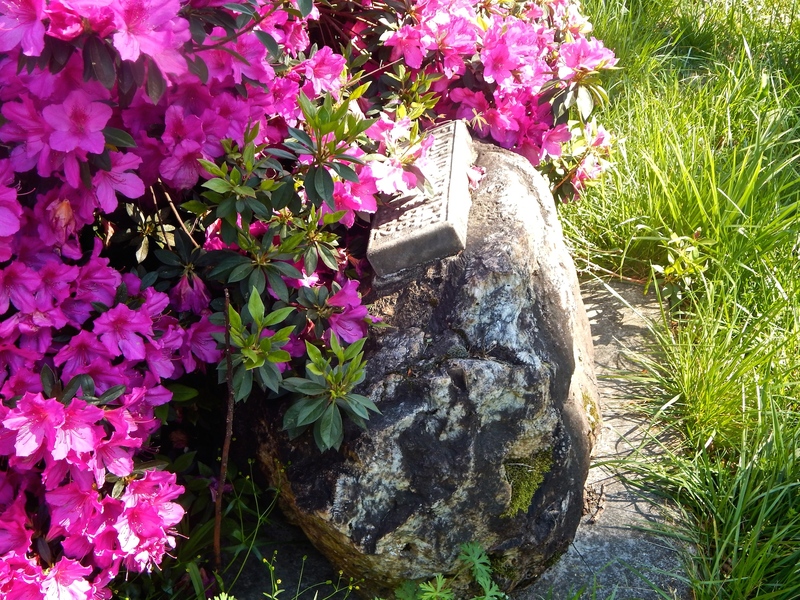 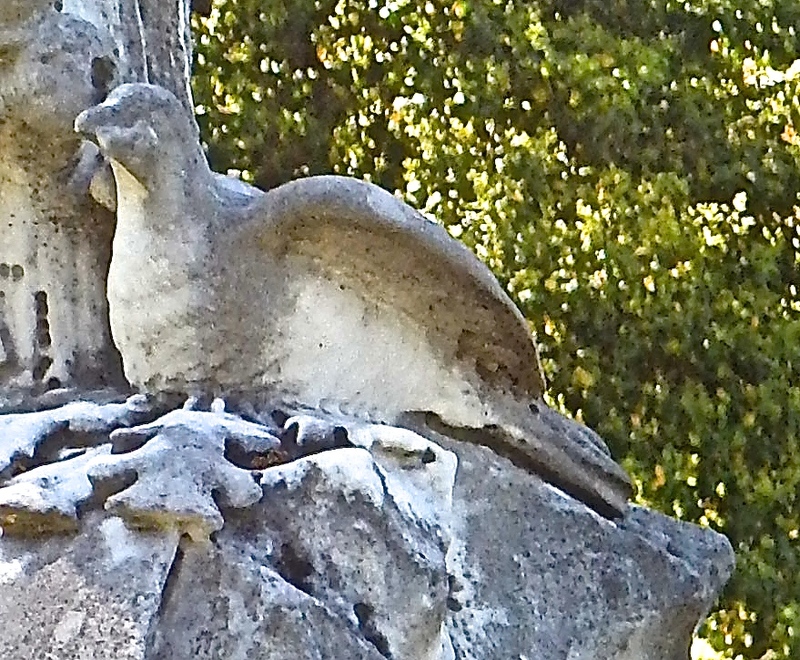 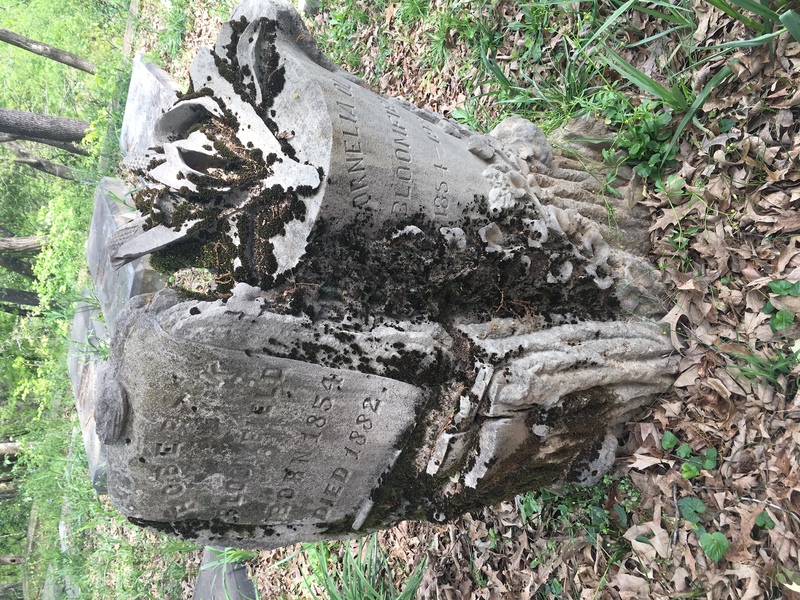 Characterized by wandering pathways and the utilization of natural topographical features, the physical structure of the Rural Cemetery Movement was very much concerned with the incorporation of natural imagery. Accordingly, the gravestones designed for rural cemeteries reflect this trend, incorporating a wide variety of animals and natural features. Among the more common examples are engravings and sculptural replications of doves and lambs, often used to adorn the graves of children. Possessing strong religious associations, these symbols were used to communicate the innocence and purity of the deceased, providing the bereaved with an eternal reminder of their loved one’s spiritual identity. Other examples of natural imagery include the use of carved tree trunks and raw, emerging stones, which both serve to communicate the importance of natural imagery in the rural cemetery movement. While tree trunks are often used to indicate a life cut short, emerging gravestones speak to the eternal quality of the stone itself, used to suggest a resistance to the forces of time and the infinite nature of the monument.[1] Found amidst the natural scenery and rolling landscape of rural cemeteries, the incorporation of animals and natural imagery provided the mourning with a comforting, eternal symbol of the natural world to accompany their loved ones through the passage of time.

← Masons and Stonework
Communities of Oconee Hill →
Gravestones and Symbolism