Clara Ella Hill Cunningham lived a short life of 23 years, enjoying a few months of married life with William Cunningham but many years with her large family.

Clara Ella Hill Cunningham was the wife of William R. Cunningham and the daughter of Blanton Meade and Elizabeth Ann Hill (though the initials on Clara’s tombstone say A. E. Hill, which could indicate a mistake). She was born in Oglethorpe County, Georgia and died in Aberdeen, Mississippi. ​Clara’s husband was a banker and planter in Aberdeen, MS, and they married in Athens on September 11, 1855 — sadly just a few months before her untimely death. ​Though middle child Clara lived only 23 short years, she graduated from Wesleyan Female College in Macon, Georgia, and spent time with a large family including father Blanton Meade Hill, mother Elizabeth Ann Hill, brother Alonzo Alexander Hill, sister Elizabeth McGehee Hill, sister Georgia Ann Hill, sister Augusta Hill, brother Blanton Abram Hill, and sister Susan Tabitha Hill. All of her family is buried with her in Oconee Hill Cemetery except for her youngest sister who is buried in Mississippi and Susan, whose burial location is unknown. ​Her headstone proclaims she was a Christian and that “living and dying she was the Lord’s.” Sources:

Clara’s grave and links to some family members: 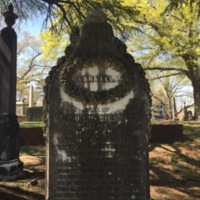 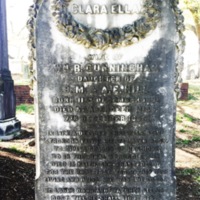