A Short History of Black Athens

Athens, Georgia was founded on December 1806.  In 1860, slaves made up over half of the population in Athens, with 1,892 living in the area. During the Civil War from 1861 to 1865 there was no major battles within the Athens area.  After the Confederate soldiers were defeated, freed slaves came in masses to commemorate the Emancipation Proclamation, and African American education institutions prospered throughout Athens. The Knox Institute opened in 1868, the Methodist school in 1879 and Jeruel Academy in 1881. All three schools offered primary, intermediate, industrial, and nurses' training. African Americans had a strong presence through the press; although it was rare in most southern cities, Athens had three black newspapers. These newspapers were the Athens Blade, the Athens Clipper, and Progressive Era. Due to an increase in black professionals, the black middle class started to emerge with the assistance of the Freedman’s Bureau. Athens had eight large black neighborhoods along with five smaller groups of houses where African-Americans lived. In the early 1900s, Athens’ demographic representation was almost equally split, as the city had a total of 5,190 African-American residences, and 5,055 white residences.

Even with an almost equal proportion of black and white people in Athens, Jim Crow and segregation still negatively impacted the treatment of black Athenians. According to the report, “Lynching in America: Confronting the Legacy of Racial Terror,” more African American Georgians died at the hands of lynch mobs than any other state between 1877 and 1950. Oconee County, a county directly adjacent to Athens-Clarke County, was the fourth-highest county in terms of number of lynchings of African Americans during that period of time. Oconee County made the news largely because of an infamous incident in 1905, in which a mob stormed the Oconee County jail in Watkinsville and pulled out nine of 10 prisoners accused of various serious crimes. The mob tied the nine men, eight black and one white, to a fence and shot them. One of the nine survived, but the eight who died made the Oconee lynching one of the largest ever recorded.  One Athens ­area lynching can be recalled as particularly heinous, the Moore’s Ford lynching of July 25, 1946 near the Oconee County­-Walton County line. Like most lynchings, no one was ever prosecuted for the killings of two young black couples working as sharecroppers on a Walton County farm, but following the Moore’s Ford lynching, Pres. Harry Truman created the President’s Commission on Civil Rights. Truman also proposed a federal anti­lynching law, but it was defeated in Congress by Southern senators. Clarke County has no record of a lynching, although in 1921 a mob raided the jail in Athens for a prisoner accused of murder, John Lee Eberhardt, whom they took down to Oconee County to be tortured and killed.

Even though African Americans were experiencing the negative effects of racism and bigotry, legalized and institutionalized under Jim Crow in the 1900’s, cultural and economic prosperity was on the rise in many African American communities. The economic progression of black Athenians was highlighted by the corner of Washington and Hull streets, which became known as the ‘hot corner’ for the black community. This block became recognized as the ‘hot corner’ as it became the focal point of the black downtown Athens community. At the ‘hot corner’, black success was prevalent. There were black lawyers, dentists, doctors, and other professionals that worked in office spaces in the Morton Building on the corner of Washington and Hull . 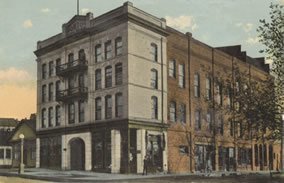 The Morton Building in Athens, Georgia.

In addition to the “hot corner,” there were many other spots that showcased black progress.  The Morton Theatre is an opera house that was built by and for African-Americans to host African-American entertainers. The Morton Building, which houses the Morton Theatre, is a structure that was constructed in 1910 by Monroe B. “Pink” Morton. Monroe Morton was a prominent African American contractor and businessman in Athens; he owned 20-30 other buildings in Athens and was the publisher of the Progressive Era, an African American newspaper. The Morton building housed the offices of many successful African Americans, including the office of Dr. Ida Mae Johnson, the first black female dentist in the state of Georgia.. The Morton Theatre hosted its first concert in 1910, with both African American and white patrons in attendance; interestingly enough, Morton reserved a special section in the balcony for white patrons in the midst of Jim Crow. Prominent African American performers like Louis Armstrong, Cab Calloway, Black Patti, Alice Carter, and Duke Ellington have performed at the theatre, which is the oldest surviving vaudeville theatre in the United States. The Morton Theatre is listed in the National Register of Historic Places, and was restored by a citizen-approved sales tax in 1987 as a community performing arts space. 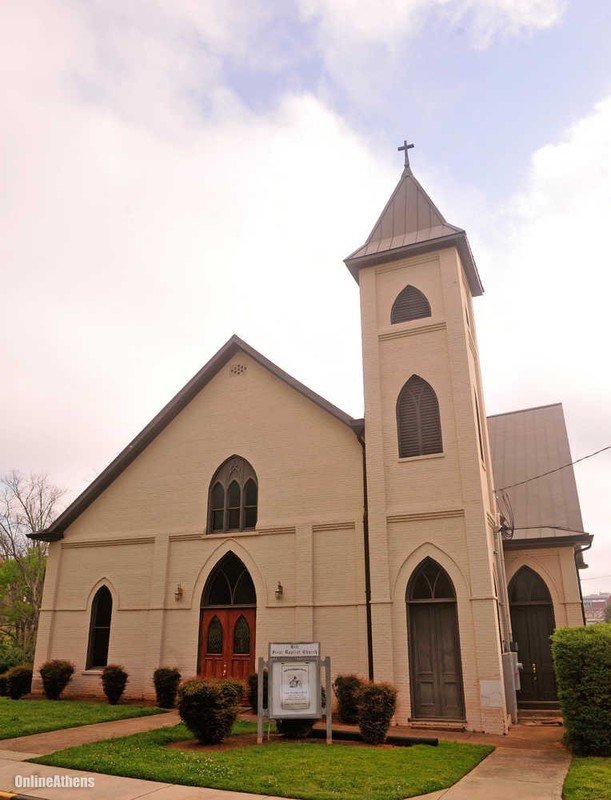 Even though the town of Athens had no segregation ordinances after Jim Crow, whites and blacks were separated socially both by choice and economically. Blacks and whites continued to worship separately in churches. The first African American church in Athens was Hill First Baptist Church, which was founded in 1857.  Hill First Baptist church was followed by the founding of the First A.M.E church in 1866 and  Ebenezer Baptist church in 1889. A typical African-American service consisted of a pastor or minister whooping or exhorting, this was to utilized the use of imagery and analogies to help visualize their accounts of the teaching of the Bible. Pastors who incorporated these techniques used them for two reasons, to teach the Bible and to motivate members through their troubles that they faced personally in a Jim Crow society. Inspiration and teaching were both essential to the congregations, because the church represented a “rock” for the African American community and aided in the advancement of the congregation. There was a large celebration just this summer (in 2016) to commemorate the 150 year anniversary of the founding of Athens' First AME Church. The current church building, which is situated on the corner of Hull and Dougherty, is 100 years old; the original location of First African Episcopal Methodist Church, named Pierce Chapel, was established on the corner of Hancock and Foundry. The congregation celebrated by marching through downtown Athens, from the Morton Theatre to the present location of the church on Hull and Dougherty, where a celebrational Sunday morning service was held. 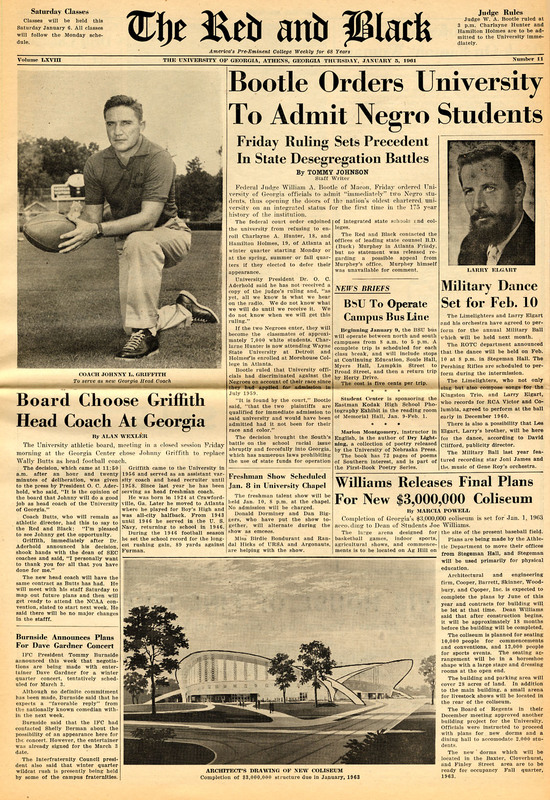 The Athens area grew and made some gradual racial progress throughout the 20th century. The University of Georgia became integrated in 1961, by its first two African American students, Charlayne Hunter and Hamilton Holmes, and in 1963, the Clarke County public schools were integrated by Wilucia Green, Margie Green, and Bonnie Hampton.

In an effort to see more racial progress, Athens became a city in which memorable protests in support of the Civil Rights Movement took place. Many black Athenians to this day remember the protests that took place many times in 1964 at the Varsity on West Broad Street in Athens, Georgia. The protests at the Varsity were in support of the Civil Rights Movement, and were in effort to confront the restaurant's policy of segregation. In the years prior to the protests, African-Americans were not allowed to step foot in the Varsity, as the restaurant’s former downtown location only served African Americans through a walk-up window. The other Varsity location, on Milledge and West Broad, did not serve African Americans at all. At these locations, black Athenians could only work as car hops, bringing out food from the Varsity's kitchen to cars driven by white people. Civil rights protesters from churches in Athens began to plan protests on the West Broad Varsity in 1964. Many times throughout this year, groups of African Americans left Ebenezer Baptist Church West to protest the restaurant's policy of segregation. The largest and most memorable of these protests took place in the spring of 1964, in a protest in which The Ku Klux Klan appeared in counter-protest and many young black protestors went to jail. A few of the young black Athenians that went to jail went on to become prominent figures in government, law, and the academy.

The protests on the Varsity were said to have been inspired by the ground-breaking lunch counter sit-ins in Greensboro, North Carolina. Charlie Maddox, a protester who marched in front of the Varsity in 1964, said “We saw what was happening in Greensboro and we thought we needed to integrate this new establishment.” To celebrate the 50th anniversary of the 1964 Civil Rights Act, Charlie Maddox, Ken Dious( a civil attorney during the 1964 protests), and many other people who were apart of the Varsity protests gathered at Ebenezer Baptist Church West to be interviewed by documentary filmmakers seeking to shine a light on how the civil rights movement played out in Athens. That short film is linked at the bottom of the page.

Throughout all of Athens' history, many African Americans lived their entire lives in Athens, GA. Black Athenians have faced their fair share of struggles, but they too have overcome morally gross behaviors and grown stronger as a community. African Americans have long fought to earn true equality, and throughout history have used many techniques to demand the respect they rightfully deserve. In my opionion, one of the most interesting techniques was explained to us by a local Athens expert on Brooklyn Cemetery, Mrs. Mereiwether Rhodes, which was through the naming of children. Throughout the 1900s, sometimes American parents named their children names draped in respect, like Major or Queen, in order to demand a sort of respect when addressing their child.

African Americans continue to find unique avenues to combat the continued oppression of blacks in the United States of America. Like the great Reverend Martin Luther King Jr. said, "The arc of the moral universe is long, but it bends towards justice", I hope to believe in a country, and a world, that is able to rid itself of all forms of oppression.

Brooklyn Cemetery: A Brief History and a Tour →
A Short History of Black Athens