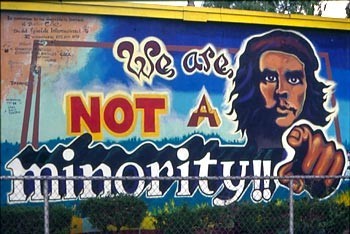 The Chicano Movement was based on Mexican-American affirmation of heritage and the realization that their heritage was being lost to the United States’ melting pot. Chicano, at the time of the movement, was an indicator of a proud Mexican-American. Initially the term Chicano served as a derogatory identifier for Mexicans who recently immigrated to the United States. Much like other ethnic groups, Chicanos faced laws and social codes that kept them in an economic and social dependency to the white majority. Jose B. Cuellar explains quite clearly that “‘Chicanismo’ referred to the driving consciousness of the shared struggles for human and civil rights” and all culminating into the now phrased Chicano Movement. The Chicano Movement’s catalyst was the systemic racism that was seen across the United States, and Chicanos began to awaken from this state of idleness. Richard Duardo’s account of this awakening illustrates the importance behind the movement and why it was important to not back down for such violent resistance.

The Origins of the movement as well as the word Chicano are beautifully illustrated in Rodolfo Gonzales’ poem, I am Joaquin. In one excerpt, Corky Gonzales painted the image that by forgetting one’s past was to lose all sense of identity in the melting pot. “Who rejects my father and my mother and dissolves into the melting pot to disappear in shame.” For Chicanos, the history and the color of their skin defined who they were and who they would be fighting against. Droves of Chicanos were shipped off to fight against the enemies of capitalism, while back home Mexican-Americans were treated as second class citizens. The Chicano Movement was a means to break from the chains of assimulation and to stand idle in the face of oppression. Chicanos fought for many privileges that would help keep Mexican-Americans from losing their identities as Mexicans. They sought to have their voices represented equally in Congress, in local offices, and even in school boards. Chicanos fought for the possibility of have teachers and courses that related to their beliefs and lives. In this short exhibit of the Chicano Movement however, one will only see the ideology behind the movement with an emphasis behind the shift from non-violence to militancy, the cultural nationalism, the Chicana activist, and the importance of art on the Chicano Movement. 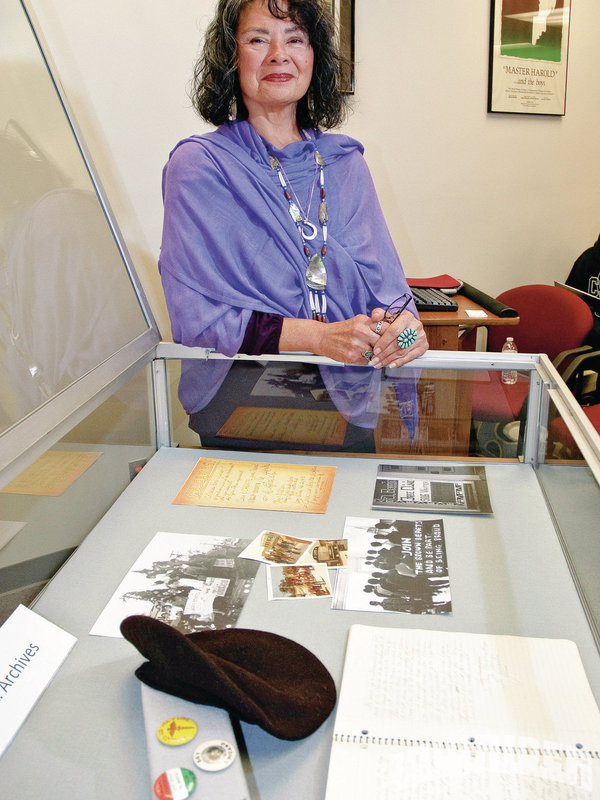 Gloria Arellanes was a the former Minister of Finance for the Brown Berets; eventually, she would leave the group to pursue her passion for social work by working in clinics (in the Los Angeles area) and found the women’s group, Las Adelitas de Aztin.

Chicana feminists were central voices in the Chicano movement. They embraced a Latina perspective of struggle and resistance that acknowledged the multiple sources of oppression for brown women: race, class, gender, and sexuality. Without the full understanding of Chicana experiences, the entire Chicano movement was hindered in its effort to achieve liberation.  Freedom and equality had to be a reality for every Chicano/a. Chicana feminists were caught between two political worlds, the machismo nationalism of the Brown Power movement and the liberal racism of the women’s liberation movement of the era. Their experiences with racism and imperialism were not those of white feminists and their experiences with sexism in machismo notions of la familia contradicted the ideal of Chicano unity. This meant attacking the sexism and racism within the Chicano movement and the second wave feminist movement.

Political organizations powered the Chicana feminist movement. Las Hijas de Cuauhtemoc (Daughters of Cuauhtemoc) formed in 1969. It was the brainchild of Chicana university students. It aimed to raise awareness and to provide information about resources from feminist activities. In 1970, Chicanas established the Comision Femenil Mexicana Nacional (CFMN, or National Mexican Women’s Commission), which directed its efforts toward many causes, including the fight against forced sterilization of brown women.

Prominent Chicana feminists would offer their leadership in words and deeds. Among them were writers Gloria Anzaldúa, Cherie Moraga, and Ana Castilo. Chicana feminists produced a lively world of music, literature and art. In addition, there were Chicana newspapers and journals that carried their message.