The counterculture movement, from the early 1960s through the 1970s, categorized a group of people known as "hippies" who opposed the war in Vietnam, commercialism and overall establishment of societal norms. Those included in this movement sought a happier and more peaceful life and often did so by experimenting with marijuana and LSD.

One of the most memorable music festivals during this time was the Woodstock Music and Art Festival. This highly disorganized three-day-long concert was the epitome of counterculture--from the clothes attendees wore to the anti-war messages performed by the singers.

Much of hippie fashion came from their opposition to commercialism. Most of the clothing that hippies wore was not purchased from major stores, but instead from yard sales or flea markets. Their fashion choices distinguished them from the rest of society because they wore bright colors and things that others would not wear. Their fashion was often a statement of who they were and what they believed.

The counterculture movement largely was in support of the antiwar movement. They organized protests while brandishing signs promoting peace, love, and drugs.  Burning draft cards were also a symbol of the movement and became iconic of the anti-war movement.

During the late 1960’s and early 1970’s, the genre of Psychedelic rock emerged as the popular type of music for participants of the Counterculture movement. The Psychedelic genre was famous for its musical replication of the experience of mind-altering drugs by invoking the three core effects of LSD: depersonalization, dechronization, and dynamization; all of which detach the user from reality. Some of the psychedelic rock musicians like Janis Joplin and Joan Baez were based in jazz, blues and folk, while others like the Beatles and Jimi Hendrix incorporated non-Western instruments with electric guitars and looping studio effects. While the era of psychedelic rock essentially ended in the late 1970’s with the birth of the disco era, the peak years were between 1966 and 1969 and included milestone events like the 1967 Summer of Love and 1969’s Woodstock Music Festival.

Although his mainstream career only spanned four years, Jimi Hendrix is considered to be one of the most influential and celebrated artists of the 20th century. His experimental use of the over-amplified electric guitar helped to popularize the previously undesired technique. This clip features Hendrix’ arguably most popular performance: the Star Spangled Banner at the 1969 Woodstock Music Festival. Hendrix used this performance on a national stage to protest the national anthem and the violence carried out under the flag. The musical performance was a literal interpretation of the lyrics “bombs bursting in air,” and “the rockets red glare.” The rumbles and wails of the amplified guitar make subtly unpleasant pitches to represent Hendrix’s protest of the ugliness behind the American glory that the national anthem is meant to represent.

Janis Joplin was an influential singer during the Counterculture movement who was famous for her raw, powerful vocals and emotional songs. Joplin rose to fame in 1967 during an appearance at the Monterey Pop Festival, as the lead singer for the San-Francisco psychedelic rock band Big Brother and the Holding Company. After releasing two albums with the band, she left to pursue a solo career. Joplin made many appearances at music festivals including the Woodstock Music Festival and the Festival Express train tour. Joplin died of an accidental drug overdose at the age of 27 after releasing three albums. Recorded a few days after her death, her 1971 hit, “Me and My Bobby Magee”, quickly rose to the top of the U.S singles chart.

Joan Baez was a psychedelic artist who represented the folk and blues side of the genre during the early 1970’s. Baez’s contemporary folk music often included messages of protest or social justice that reflected the views of the Counterculture movement. She quickly rose to fame in the 1960’s and released her first three albums that continuously stayed on the Billboard Top 100 chart. Her 1975 hit, “Diamonds & Rust”, was a Top-40 hit for Baez on the U.S. pop singles chart.

After leading the “British Invasion” into the United States pop market in 1964, the Beatles quickly became the top-selling band in the United States and currently still hold the title of the top-selling band in history. The Beatles built their reputation through “Beatlemania” in the early 1960’s, but the band’s music grew in sophistication, led by songwriters Lennon and McCartney, and the band eventually was perceived to be the embodiment of the ideals of the Counterculture movement. The Beatles are known to be pioneers of the use of non-Western instruments, looping effects, and lyrics to detach listeners from reality in their later psychedelic albums. Their 1967 album, “Sgt. Pepper’s Lonely Hearts Club Band,” was extremely popular during the Counterculture movement. Arguably one of the most popular songs on the album, “Lucy in the Sky with Diamonds,” is a classic example of the Beatles’ psychedelic music.

Advertised as “three days of peace and music,” Woodstock Music Festival was one of the largest gatherings for those part of the counterculture movement. The music festival took place between August 15-18 1969 concluding on Monday the 18th with Jimi Hendrix’s memorable performance of "The Star Spangled Banner."

The four men behind Woodstock, Mike Lang, John Roberts, Joel Rosenman and Artie Kornfield created the concert for two reasons: to raise funds to create a music studio in the artist colony of Woodstock, NY and also to have a never-before-done music festival. Lang and Kornfield came up with the idea around Christmas time 1968 at a "pot party." After failing to secure a spot for the festival, the Lang worked out a deal with a farmer by the name of Max Yasgur to hold the festival on his farmland in Bethel, NY.

Over 100,000 tickets were sold for this concert, but when Lang arrived to the festival site the Friday morning there were 30,000 kids camping out in front of the stage. Already highly disorganized, that moment set the stage for how the rest of the three-day-long festival would go. Eventually, over 400,000 people showed up to the unfinished stage. Roberts said in a New York Times article that everything was stolen from the merchandise, to the walkie-talkies--even the Jeeps the organizers drove went missing.

The three-day-long music festival included 33 performances by groups like Jefferson Airplane, The Who, the Grateful Dead, Sly and the Family Stone, Janis Joplin, Jimi Hendrix, and Creedence Clearwater Revival just to name a few.

Despite the musicians discussing/performing about controversial issues--opposition of the Vietnam war--the music festival was peaceful. Only two people died, one from a drug overdose and the other was accidentally run over by a tractor. With the lack of organization, this music festival could have been a disaster, but instead it is remembered fondly with many trying to recreate it--although no one has been successful. 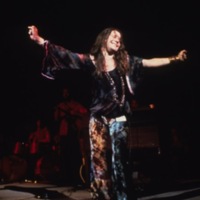 Janis Joplin during her performance that went from the late hours of the second day into the third day of the festival. 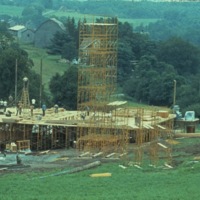 Building of the stage where the 33 acts performed. The stage was "incomplete" by the time of the festival since there was no roof. 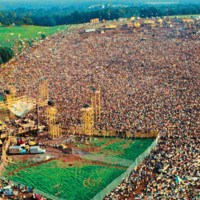 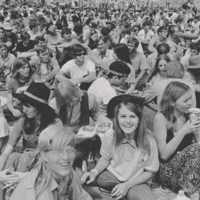 The crowd of Woodstock was relatively calm and peaceful throughout the festival with many of the audience members under the influence of drugs. 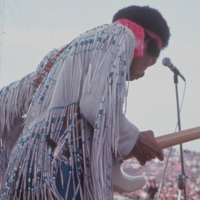 Jimi Hendrix during his performance which ended the weekend festival. 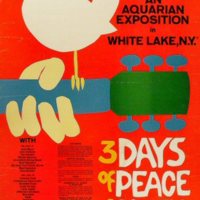 One of the early music festival posters before the location of Woodstock was moved. 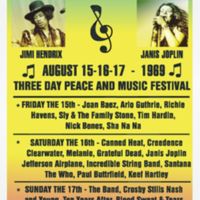 Here is another image of the line up poster for Woodstock with one of the locations listed before the venue was moved to Bethel, NY. 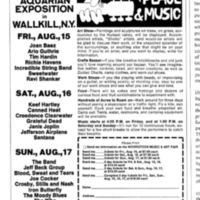 This is one of the advertisements the four creators placed in newspapers to advertise for the festival. 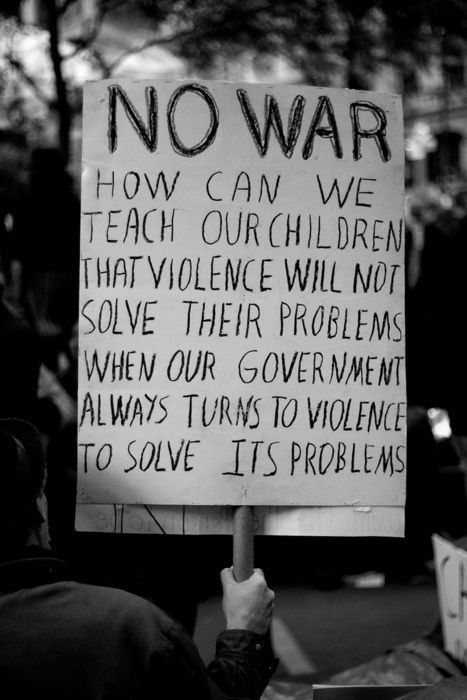 While anti-war protests were almost commonplace during the Vietnam War, the Counterculture Movement was one of the most iconic groups making their voices heard.  Images of teens burning their draft cards and waving Viet Cong flags have burned their way into the collective memory of the United States.  Their uses of guerilla theatre and community activism played invaluable roles in threatening the support of the Vietnam War.  Central to the Counterculture Movement were the Hippies, who promoted peace over war and protested conscription.  They held rallies and protests which were characterized by music, sex, drugs, vulgar language and nudity.  Even other anti-war groups tried to delegitimize the Hippies because they did not fit the moral standards of the other groups.  War sympathizers and anti-war protestors enacted a 'regime of visuality' that measured one's loyalty to the state by an evaluation of one's appearance.  Essentially, visual deviance was seen as opposition to war.

Although the Counterculture Movement was loosely connected by common beliefs, there was no central organization to the movement.  Rather, individual groups of people organized marches and demonstrations.  Many were peaceful, although the social and moral reputations of those involved often led to conflict with local law enforcement.  None was so clear as the Kent State shootings, were four students were killed by the Ohio National Guard for protesting the Vietnam War. 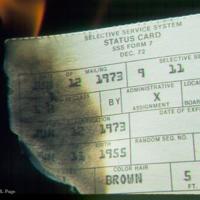 Selective Service cards were symbols of the hated war- and the draft accompanying it. 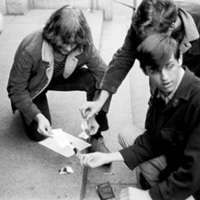 Although the burning of draft cards became synonomous with the Counterculture Movement, it was not widely practiced. 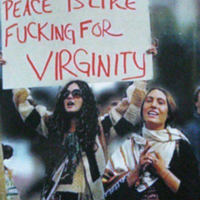 Seemingly vulgar signs merely showed that Hippies were unafraid of taboo topics and furthered their notion of free love. 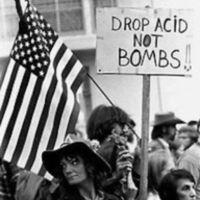 Drugs were greatly used by members of the Counterculture Movement as they fought against war and for freedom of expression. 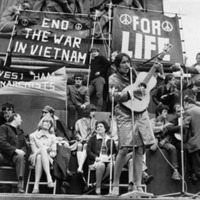 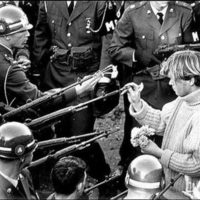 Flower Power is a term used to describe the Hippie Movement, and was fueled by their clothing and use of flowers at protests. 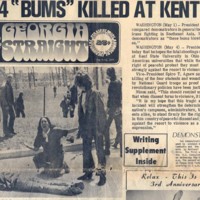 Student protests were seen as part of the Counterculture movement, though this came with deadly consequences. 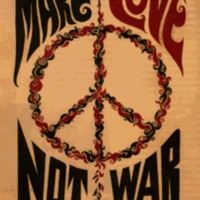 While Americans were inundated with war propaganda, Hippies produced their own posters promoting peace. 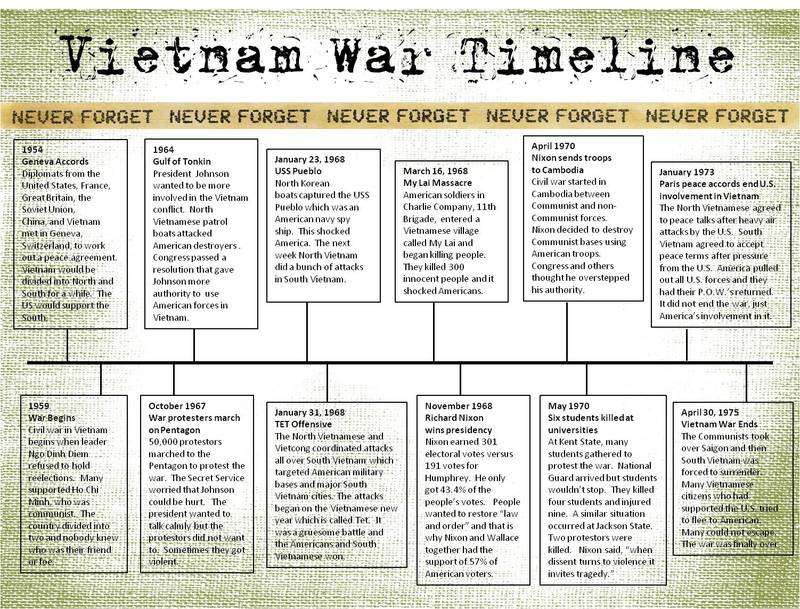 Fashion during the counterculture period can be best represented through the photographs that were taken at the time. These photographs were taken at concerts, music festivals, and other events occurring alongside the Civil Rights Movement. Hippies believed that fashion was the ideal way to express who you are, which is why their fashion and hair statements are iconic. Hippie fashion included many trends, such as: bright colors, "raggedy" clothing, beads, fringe, afros, and sandals. Many more fashion trends also define the counterculture movement. Their fashion distinguished hippies from the rest of society. Most clothing was purchased from yard sales, thrift shops, and flea markets in order to fight commercialism. 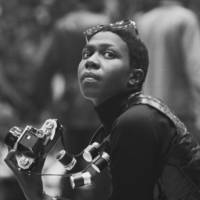 Member of the Black Panther Party 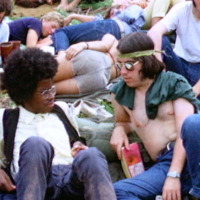 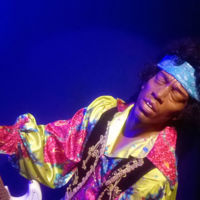 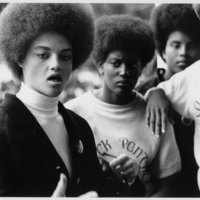 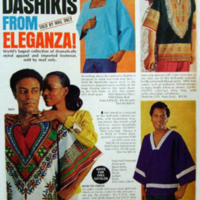 An ad for Dashikis 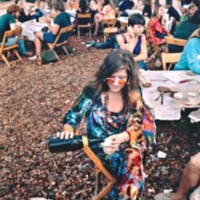 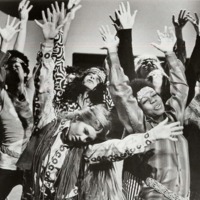 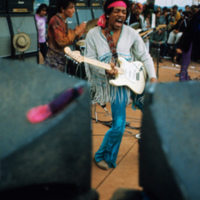