Peter Gordon (1697-1740) arrived in the Georgia colony alongside James Edward Oglethorpe in 1732. Gordon's journal offers a first-hand account of the challenges that faced the original colonists, criticisms of the Board of Trustees, and interactions with indigenous peoples. Gordon served as a tithingman, responsible for ensuring that families in the new colony received proper provisions; and later as the first bailiff. Written after his return to England in 1735, his journal contains blank spaces where he could not remember the exact dates of events and ends abruptly in the middle of a sentence.

Keith Read, a collector of Georgia documents, acquire the journal. When Read died in 1940, the Wormsloe Foundation of Savannah purchased a portion of his collection, including the Journal of Peter Gordon, and presented it to the University of Georgia in 1957. 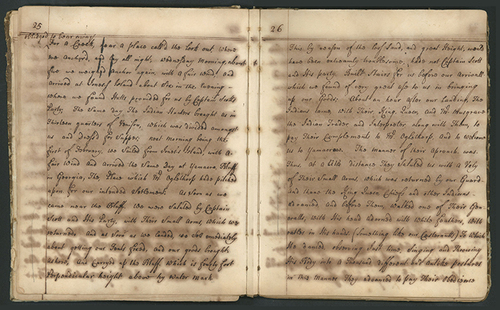 Pages 25 and 26 from the Journal of Peter Gordon, describing the colonists' arrival at Yamacraw Bluff in 1733.
Keith Read Papers (ms921), Hargrett Library

Arrival at Yamacraw Bluff (Transcription of Pages 25 and 26)

...obliged to bear a way for a creek near a place call'd the look out, where we anchor'd and lay all night. Wednesday morning, about five we weighed anchor again, with a fair wind, and arrived at Jones's Island about six in the evening where we found hutts provided for us by Captain Scott's party. The same day the Indian hunters brought us in thirteen quarters of venison which was divided amongst us and dress'd for supper.

Next morning being the first of February, we sailed from Jones's Island, with a fair wind and arrived the same day at Yamacra Bluff in Georgia, the place which Mr. Oglethorp hade pitched upon for our intended settlement. As soon as we came near the Bluff, we were saluted by Captain Scott and his part, with their small arms, which we returned. And as soon as we landed, we sett immediately ashore, and carried up the Bluff, which is fourty foot perpendicular height above by water mark. This by reason of the loos sand, and great height, would have been extreamly troublesome hade not captain Scott and his party built stairs for us before our arrivall, which we found of a very great use to us in bringing up our goods.

← Colonial Records of the State of Georgia
A View of Savannah →
Journal of Peter Gordon, 1732-1735