On January 7, 1825, Chilly McIntosh, son of Creek chief General William McIntosh, wrote out for his cousin, Governor George M. Troup, a copy of the laws of the Creek Nation. This was the second known attempt of the Creeks to collect their laws, an earlier version being committed to writing by General William McIntosh and other Creek leaders in 1818. 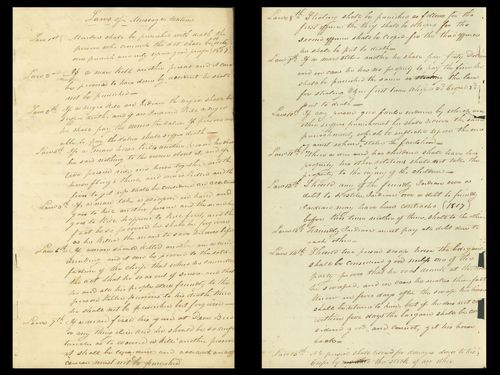 Murder shall be punished with death the person who commits the act shall be [added text: th [the] ] only one punish and only upon good proofs
1817

If a man Kill another person and it can be [unclear text: provened ] to have done by accident he shall not be punished.

If a negro kill an Indian th [the] negro shall [deleted text: be ] suffer death and if an Indian Kill a negro he shall pay the owner the value. If person not able to pay the value shall suffer death.

If a man [unclear text: horse ] Kills another person he shall be said nothing to the owner about it, and if two person ride one horse together and the horse flings them, and one is Killed and [unclear text: the ] lives to get up shall be considered an accident

If a man take a weapon in hand and goes to kill another person and the man he goes to Kill happens to Kill first, and the fact be so proven he shall be forgiven as he Killed the man to save his own life

If a man should Killed another in a rum drinking and it can be proven to the satisfaction of the chiefs that when he committed the act that he was out of senses and that he and all his people were friendly to the person Killed previous to his death, then he shall not be punished but forgiven

If a man fired his gun at [missing word: a ] Deer Bird or any thing else, and he should be so unfortunate as to wound or Kill another person it shall be considered and [an] accident and of course must not be punished

Stealing shall be punished as follows for the first offence the thief shall be whiped [whipped] for the second offence shall be [unclear text: crossed ] for the third offence he shall be put to death

If a man [unclear text: stolen ] another he shall pay forty Dollars and in case he has no property to pay the fine he shall be punished the same as [deleted text: stealing ] the law for stealing Viz... first time whiped [whipped] 2d [unclear text: Crossed ] 3d put to death.

If any person give faulse [false] evidence by which another suffers punishment he shall receive the same punishment, which be inflicted upon the one against whom [added text: he ] stated the faulshood [falsehood] .

When a [missing word] [unclear text: dies ] and has children shall have his property his other relations shall not take the property to the injury of His children.

Friendly Indian must pay all debt due to each other.

No person shall receivd [receive] for damages done to his crops by [deleted text: another ] the stock of an other

← Selections from the Lachlan McIntosh Papers
Additional Resources →
Laws of the Creek Nation, 1825