A Buried History of the Old Athens Cemetery 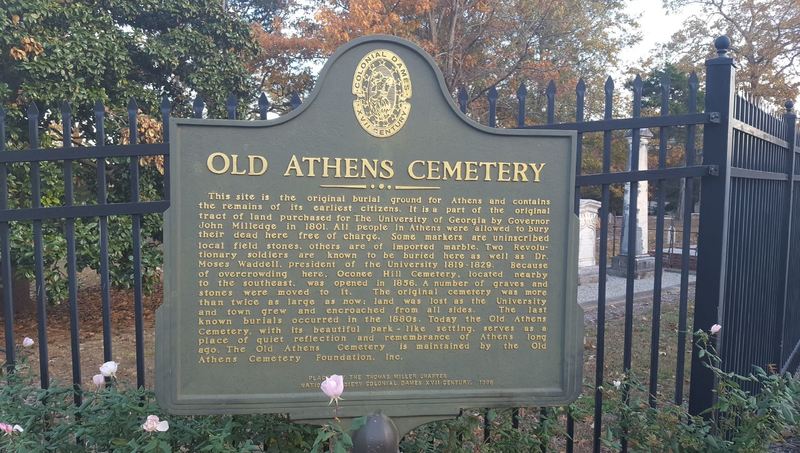 Many people in the Athens and University of Georgia communities are familiar with the Old Athens Cemetery, also referred to as the Jackson Street Cemetery, because it is located prominently along Jackson Street, between the old Visual Arts building and Baldwin Hall. What many people do not know is that the borders of this burial ground formerly extended much further than the current gated area seen today. While some of the original land of the Old Athens Cemetery is demarcated and preserved, other parts of the burial ground, including portions with unmarked graves and graves marked by simple, uninscribed "fieldstones," have been built upon as the University of Georgia grew.

College Hill was the first burial place for Athens. In 1815, future burials were prohibited in the area and a small piece of land was enclosed and designated as Old Athens Cemetery. Much of the earlier portion of the cemetery was covered by buildings and houses. The laying of railroad tracks, widening of Thomas Street, and the construction of the Visual Arts building and Baldwin Hall (1930s) also encroached on the original land of the Old Athens Cemetery, making parts of it visually unrecognizable as a burial ground. During these constructions, it was unlikely that any of the burials were removed. Multiple historic newspaper articles note human bones washing up during heavy down pours and in resident’s gardens. Whereas the portion of the cemetery that is outlined today by a stately iron fence is distinguishable as a cemetery from the many stone monoliths and tombstones marking its ~19th c. graves, the portion that has been forgotten over time consisted of unmarked graves, and graves marked by simple, uninscribed “fieldstones,” or possibly wooden markers, which have proved less enduring in the public consciousness. The maps below show how the landscape around the Old Athens Cemetery changed from the late 1800s to the present day. Note the construction of houses to the east and west of the cemetery by 1934 and the construction of Baldwin Hall after 1937. 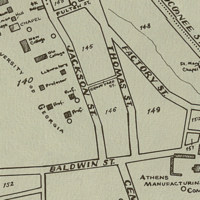 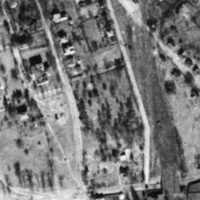 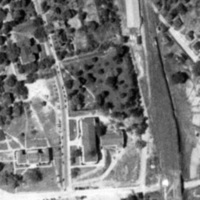 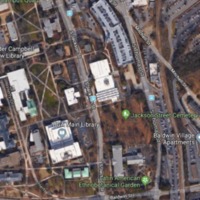 The Old Athens burial ground was in use from the 1790s until the 1880s or 1890s, even though it was officially closed in 1856. A Southern Banner article published in 1872 on Athens mortality noted that in 1871, 14 whites and 46 blacks were buried in the Jackson Street and Oconee Hill cemeteries. Unlike most cemeteries, the Old Athens burial ground was public property and burial plots required no fee. Oconee Hill Cemetery opened in 1856. Increasingly after that time, burials occurred in Oconee Hill, instead of Old Athens. Possessing considerable charm as a “rural cemetery” that epitomized a new Victorian ideal for urban cemeteries, Oconee Hill was so desirable that numerous people buried in Old Athens were exhumed by their relatives, and moved to new plots purchased Oconee Hill. However, black people who, given the time period were likely enslaved at the time of their death or at some point during their life, were buried in the flood plain of Oconee Hill, and their families were restricted from erecting monuments or even visiting their graves. By the early 1900s, black people were prohibited from being buried at Oconee Hill Cemetery. In the 1880s, Gospel Pilgrim Cemetery and Brooklyn Cemetery opened to accommodate Athens’ growing Black population. As cited in a recent Athens Banner-Herald article, local historian Al Hester stated that “African Americans began using the black cemetery at Gospel Pilgrim in the 1880s not merely because of segregation but because they sought sanctuary from constantly seeing their ancestors dug up and paved over, being told what stones to erect, and being prohibited from visiting loved ones” (1).

A Burial Place for Enslaved Africans

Multiple historical newspaper articles characterize those that were interred in the Old Athens Cemetery. As stated in a 1999 Red and Black News paper article, " the Old Athens Cemetery is the final resting place of soldiers from both the Revolutionary and Civil Wars...along with other prominent citizens of the Athens area," including students and two UGA presidents - Robert Finley and Moses Waddel (2). However, rarely acknowledged in these historical archives are people of color that were buried in the cemetery, who, given the time period of the cemetery, were likely enslaved. Only a few historic newspaper articles mention that enslaved Africans were buried in the Old Athens Cemetery. For instance, in a 1995 Red and Black article, Patricia Cooper stated that the cemetery was for all of Athens – “rich people, poor people, and slave people are all buried there" (3). In a 1978 Red and Black newspaper article, Dean Tate acknowledged that “slave burials” were encountered during the original construction of Baldwin Hall (4).

However, this knowledge has not been lost amongst black community members with long roots in Athens, Georgia. In fact, the history of the Old Athnes Cemetery has been a question for a number of years in Athen's Black History Bowl - an academic competition led by Athens resident and historian, Fred Smith. Other oral histories include a quote by an ex-slave interviewed as part of the Federal Writers Project in the 1930s:

Of special interest here are events surrounding the construction of Baldwin Hall in 1937. During the depression, federal funds, especially from the Public Works Administration, poured into campus building projects. The photo below shows from 1937 shows the foundations of Baldwin Hall being dug on the edge of the old university graveyard on the north campus. A recent Athens Banner-Herald article cited a report to the university that stated that the remains had been take from where “colored folks from Athens had be interred; numerous tibias, vertebrae and grinning skulls of colored brothers were unearthed and thrown ‘over the dump,’ while surviving relatives and friends of silent sleepers in this city of the dead shuddered to think of what an extension of building construction would mean” (1). However, it has been reported that during the construction of Baldwin Hall, the remains of enslaved Africans were exhumed and relocated to either a pauper cemetery on Nowhere Road or at a location that is now owned by Athens Waterworks (for more details on a search for the location of these reburials, please visit the “Where are we today?” tab).

Do you have any knowledge on the history of the Old Athens Cemetery or on enslaved Africans in Athens, GA? If so, please share here. 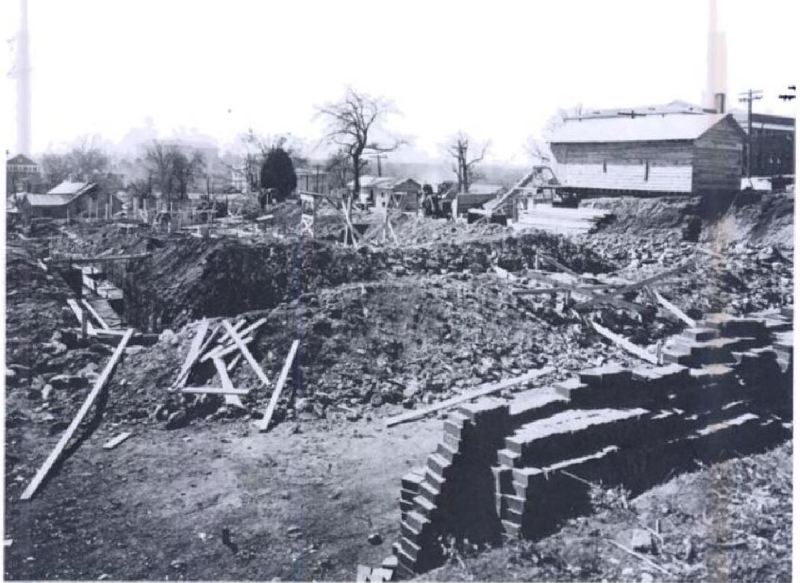