Slavery in Athens, Georgia and its Impact on Health and Disease 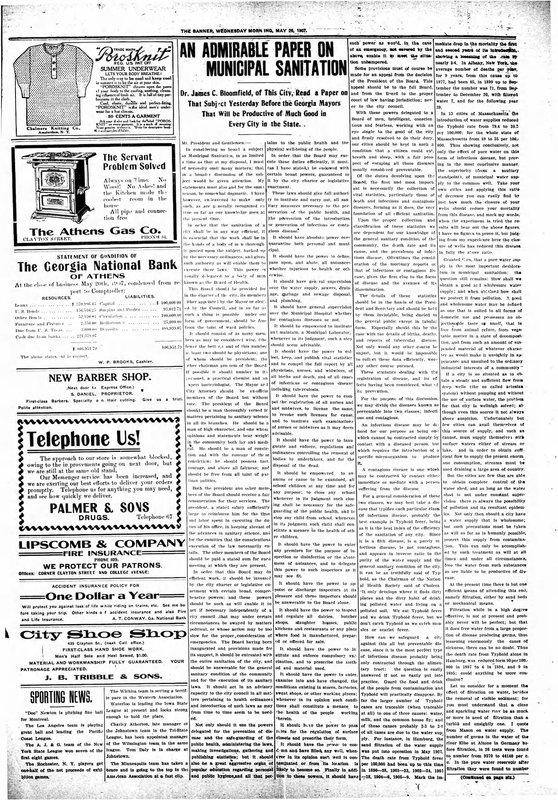 Like many urban and rural cities during the 19th century, Athens, Georgia was characterized by an increase in population size, social inequality and poverty, and poor sanitation and hygiene practices. The population of Athens more than doubled during the 19th century, increasing from 7,628 in 1810 to 17,708 in 1900. Prior to the 1860s, slaves comprised half the population. This also represents a time that pre-dates the acceptance of the Germ Theory, antibiotics, and the use of vaccinations for preventative medicine. These factors created environments that brewed and facilitated the spread of infections and diseases.

Sanitation in rural and urban communities during the early 1800s was an unknown concern to the health of the inhabitants of the community. A United States Department of Agriculture yearly report from 1863 discusses the recommendations for the placement of privies in relation to the main living quarters and to drinking water sources. Similarly, a USDA report from 1862 discusses the life expectancy of farmers being lesser than that of their contemporary clerical counterparts, despite spending the vast majority of their time outdoors. A newspaper clip (pictured here) from 1907 discusses the role improved sanitation can play in preventing infectious disease. Taking this information into account, it is likely that the inhabitants of Athens at the time were suffering from the effects of poor sanitation practices, including poorly planned outhouses next to drinking sources, which often results in infectious diseases. 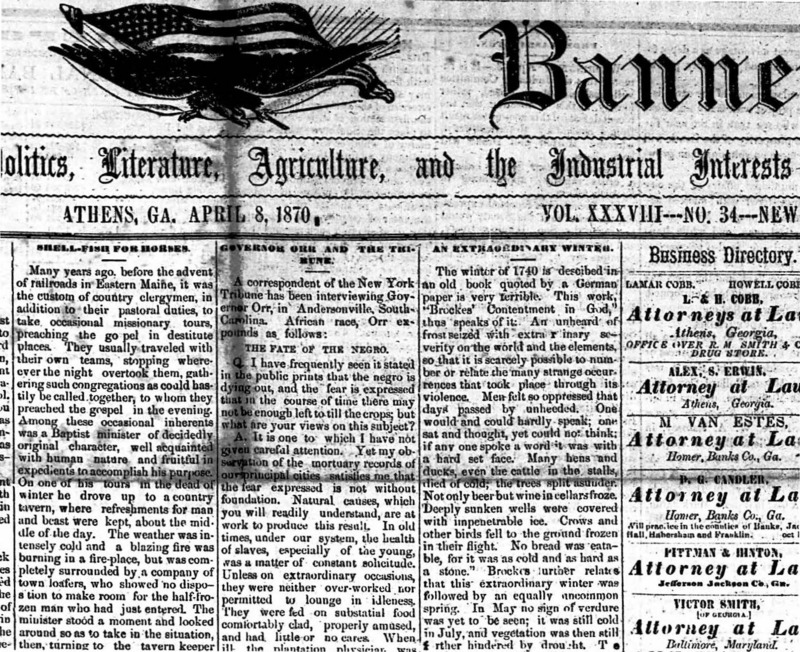 Southern Banner Article from 1870 discussing the health of ensalved people

The above conditions were likely exacerbated for enslaved Africans in Athens, Georgia. Historical newspaper articles and historians, such as Merton Coulter (1965), a known confederate and segregationist, often assert that enslaved individuals in Georgia were well fed, not overworked, and had their illness attended to because they would otherwise be unprofitable. For instance, Coulter (1965) states, “slavery is a harsh-sounding word; but in Athens, Georgia, servitude was not as harsh as the word sounded, and, indeed, in Georgia as a whole, this lot of the colored man varied from hard labor to freedom of it.” Many of the slave narratives produced in the 1930s through the Federal Writing Project also paint a picture of enslaved Africans being taken care of when they were sick (a quick search of “disease” or “sick” will return multiple hits). These narratives frequently describe how they were treated well during times of ilnness and of the use of tonics, asafetida (often used for coughing related illnesses) worn in bags around the neck, cough syrups, and pennyroyal tea to treat disease and illness. Diseases such as small pox, cholera, and typhoid fever also come up in the slave narratives.

For instance, ex-slave and Athens resident Easter Brown described how enslaved people were taken care of when they were sick:

“Marster and Mist'ess sho looked atter [them] when dey got sick lor dey knowed dat if [they] died dat much property wuz lost. Yes sum, dey had a doctor sometime, but de most dey done wuz give 'em hoarhound, yellow root, and tangy.”

Bioarchaeological data collected from Old Athens Cemetery allows us to examine the validity of these statements. Here, the prevalence of indicators of disease and infection are analyzed and compared to contemporaneous populations, allowing us to examine the embodiment of the slavery system in the United States during the 1800s. Unfortunately, diseases such as small pox and typhoid fever do not manifest in skeletal tissue. However, as discussed in more detail below, there are many indicators of disease and infection that leave marks in skeletal tissue, such as localized and systemic infections, tuberculosis, anemia, and syphilis. 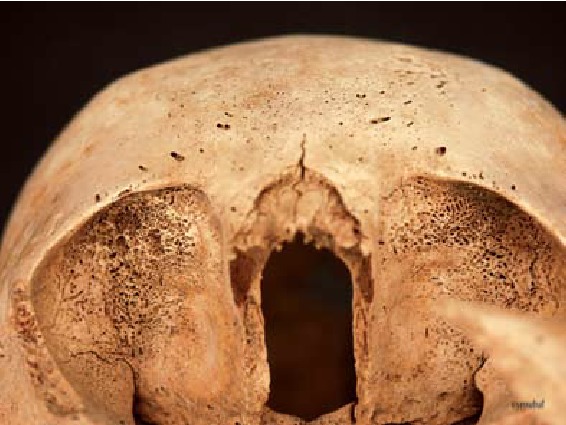 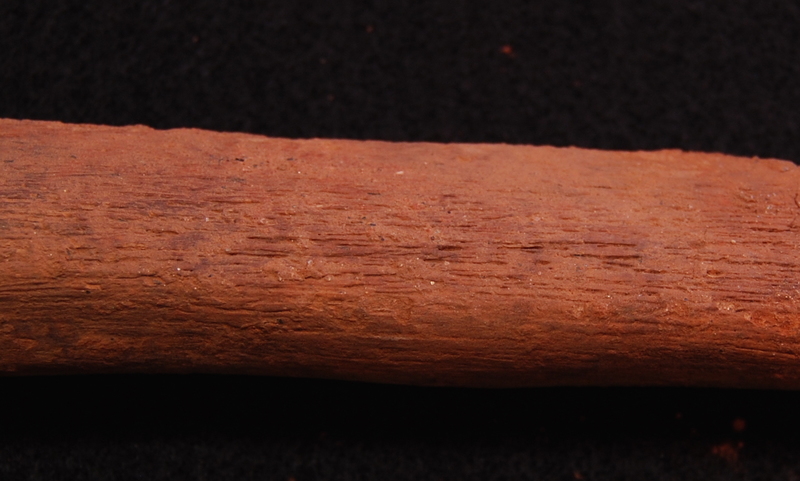 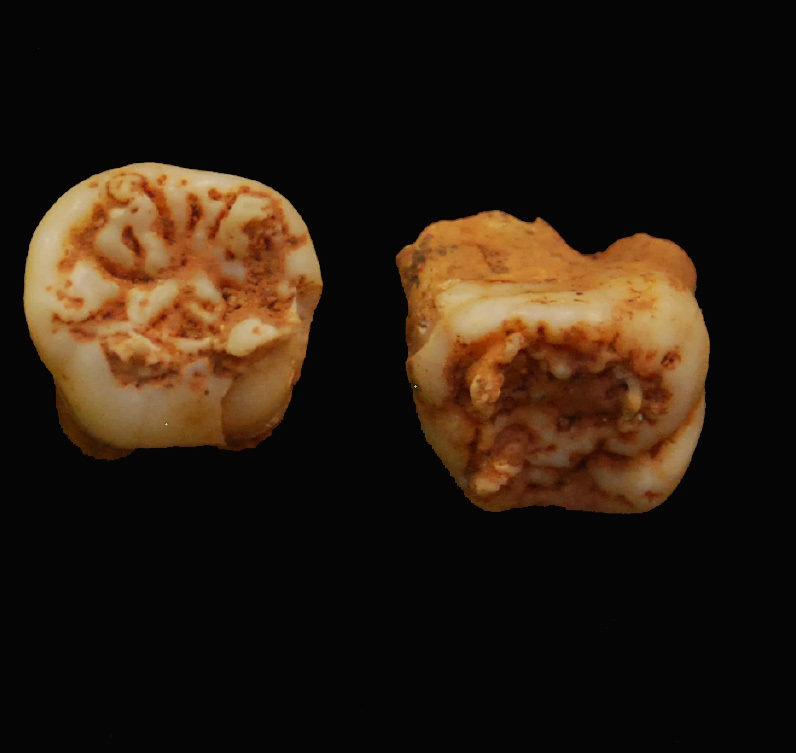 Disease and Infection: An Overview

Human bone is a dynamic, highly plastic, and responsive tissue. Once bone is modeled, or formed, it is continuously remodeled in response to external factors, such as disease or infection. Pathological changes observable in skeletal tissue result from an imbalance in the normal equilibrium of new bone formation and the breakdown of old bone. Infectious organism can enter the skeletal system through fractures, the circulatory system, or the lymphatic system (Weiss 2015).

Not all infections leave markers on bone tissue because bone remodels slowly and people generally either recover or die from an infectious disease before microorganisms have the chance to leave any trace on skeletal tissue. However, there are many infectious diseases that leave markers on the skeleton including, but not limited to, tuberculosis, syphilis, and leprosy. Non-specific indicators of disease include periostitis, cribra orbitalia, and porotic hyperostosis. Tuberculosis and syphilis were endemic to Athens, Georgia during the 19th and 20th centuries. Periostitis reflects non-specific infections that spread from soft tissue to skeletal tissue. Porotic hyperostosis and cribra orbitalia are both tied to anemia as the result of genetics, malnutrition, or parasitic infections (Larsen 2015).

The Study: Materials and Methods

The present study analyzed skeletal elements and dental remains from all available enslaved individuals interred at the Old Athens Cemetery for indicators of disease and infection (n=55). Periosteal reactions, tuberculosis, syphilis, cribra orbitalia, and porotic hyperostosis were identified and scored using methods outlined in the Global History of Health Project: Data Collection Handbook (Steckel et al. 2005). Unfortunately, many of the remains exhumbed form Old Athens Cemetery were poorly preserved, especially skeletal tissue often affected by disease and infection, such as vertebrae, ribs, and the outer cortical portion of long bones. This preservation bias likely resulted in a low prevalence of infections, especially tuberculosis and syphilis, and thus confounded our results. The prevalence of each disease or infection was calculated by dividing the number of individuals with the observed condition by the sample size. Due to the poor preservation of the skeletal remains and since each disease differentially affects skeletal tissue, the sample size used for each disease varied based on the presence or absence of associated skeletal elements. For example, of the 55 individuals, only 18 individuals had at least one tibia present; therefore, the sample size for tibial periostitis was 18 individuals (n=18).

The graphs below shows the overall prevalence of each disease in comparison to contemporaneous data. Evidence of congenital syphilis, periosteal reactions, porotic hyperostosis, and cribra orbitalia were all encountered in the Baldwin remains. Comparative data on periosteal reactions, cribra orbitalia, and porotic hyperostosis, and congenital syphilis are from the Newton Plantation in Barbados (Shuler 2011), the First African Baptist Church Cemetery in Philadelphia (1829-1841) (Angel et al. 1987), a plantation in Charleston (Rathburn 1987), and a cemetery in New Orleans (Owsley et al. 1987) for enslaved individuals. Over all, the prevalence of these diseases in the remains exhumed for the Old Athens Cemetery is consistent with comparative data, though lower in many cases, especially in regards to tuberculosis and lesions associated with anemia. This indicates fairly poor health for individuals interred in the Old Athens Cemetery, especially in regards to general infections as indicated through periostitis. These high prevalences were likely the result of poverty, poor sanitation, and poor hygiene practices. They also suggest that enslaved Africans in Athens, Georgia, experienced similar, though often lower, rates of infections and diseases in comparison to contemproaneous enslaved populations in other states and in the Caribbean. The next step is to compare this data to contemporaneous white populations of both low and high socioeconomic status. 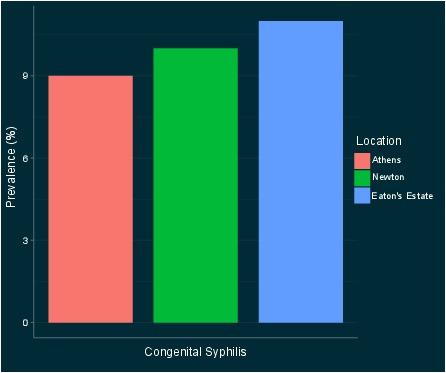 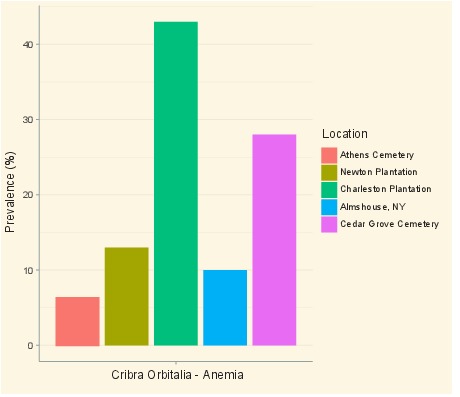 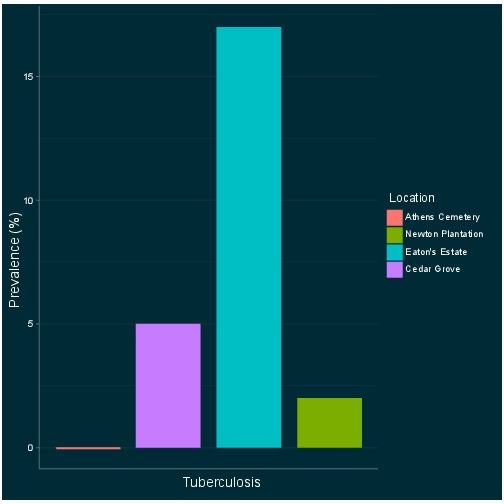 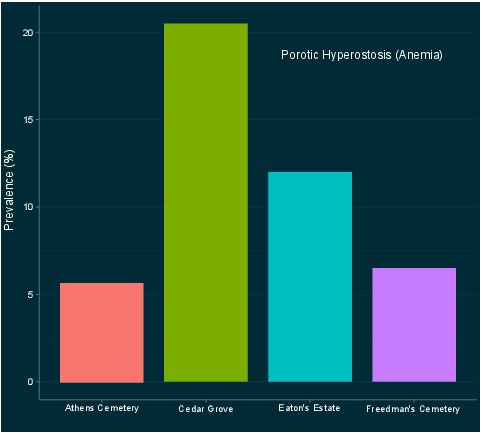 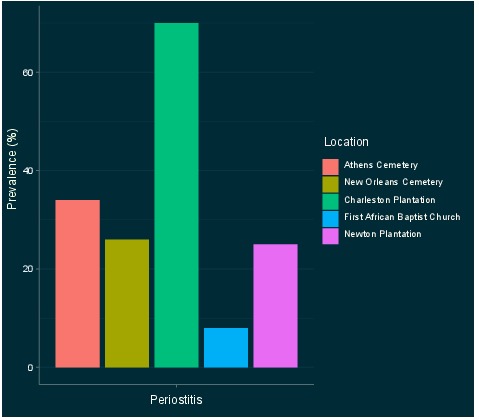 Shuler KA. 2011. Life and death on a Barbadian sugar plantation: historic and bioarchaeological views of infection and mortality at Newton Plantation. International journal of Osteoarchaeology, 21(1), pp.66-81.