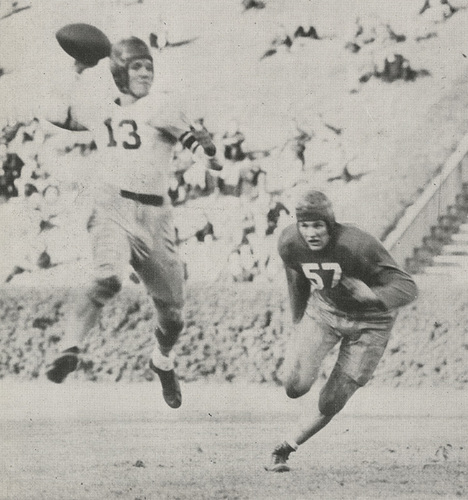 The Georgia Bulldogs record book shows asterisks next to the scores of the 1943 and 1944 Georgia-Georgia Tech game.   Why is it that these particular years of ‘Clean Old-Fashioned Hate’ warrant this special attention?

Upon the outbreak of WW2, each branch of the U.S. military faced the seemingly insurmountable challenge of providing enough officers to command the massive influx of new soldiers, sailors, and airmen necessary to fight the war.  Adding to this problem was the increasingly specialized nature of warfare, which required men trained in engineering, languages, and other more esoteric disciplines.  To alleviate this situation, the U.S. Navy established technical training schools at colleges and universities under the V-12 program. The V-12 program allowed officer candidates and sailors training for specialized service roles to enroll at colleges and complete a shortened course of study, eventually entering active service as junior grade officers.  Georgia Tech, due to its focus on engineering, was selected as a V-12 school and Navy personnel enrolled as full students as part of this program.   This allowed the Tech athletics program to have its pick of healthy, able-bodied men enrolled at the school, regardless of whether or not they had any prior college playing experience.

The University of Georgia, by contrast, was part of the Navy’s V-5 program (described in more thorough detail in the section ‘A Brief History of the U.S. Navy Pre-Flight School at UGA’ on this website), in which a Navy pre-flight training school was established at the University, but its students were not part of the general body of regular students enrolled at the University.  The few remaining students enrolled in Athens were either females, men completing courses of study to then enter the military, or men who were either too young or physical unable (a 4-F draft status) to join any of the service branches.  The Georgia Bulldogs athletics teams were able to draw from these students, but not from the Navy school’s cadets.

For Wally Butts, the prospect of facing the 1943 schedule with a team composed of men too young for the draft or exempt from the service due to physical problems would have been daunting.  Before the season began, Butts gave the team the option of disbanding or playing out what would most likely be a non-competitive season.  Had the team opted to disband for the duration of the war, Butts would have been given a contract to teach physical education to the University’s remaining students.  The team opted to compete during the season, however, and played a limited schedule during the season.

Tech also competed during the war, though its team was made up of men mostly taken from the V-12 program.

After the war, Dan Magill, long-time UGA sports information director, felt that the Bulldogs teams were at an unfair competitive disadvantage against Tech in the 1943 and 1944 games and took those games off of the Georgia record books.  These games are now listed with an asterisk in the Georgia Bulldogs media guide.  Tech, on the other hand, maintains that those two games should count for the overall series record, as they were agreed upon games that were part of the regular seasons for both schools.  For Georgia, the all-time series record against Tech stands at 66 wins, 39 losses, and 5 ties.  Tech lists the series record as 66 wins (for Georgia), 41 losses, and 5 ties.

While Georgia's commanding lead in the series is not in question, the two disputed losses add historical fuel to the fire of a rivalry that is known as ‘Clean, Old-Fashioned Hate’.