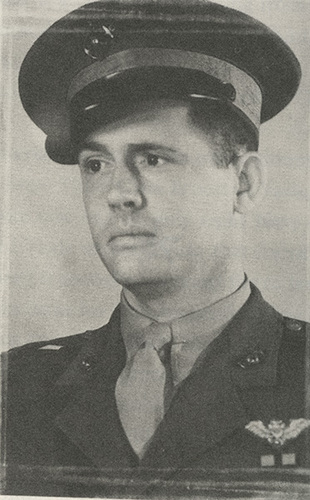 Henry Talmage Elrod of Rebecca, Georgia in Turner County played football for only one year at UGA, on George ‘Kid’ Woodruff’s 1923 squad.  He then transferred to Yale University to complete his education.  After Yale, Elrod joined the United States Marine Corps, where he earned his wings as a naval aviator.

In December 1941, ‘Hammerin’ Hank’ Elrod was stationed on Wake Island, one of America’s most isolated outposts in the Pacific Ocean, along with part of his fighter squadron, VMA-211, which was equipped with Grumman F4F-3 Wildcat fighter planes.  On the outbreak of war, Wake Island was repeatedly attacked by elements of the Imperial Japanese Navy and Air Force.  Elrod proved to be a skilled pilot and fearless in combat, downing several Japanese planes and sinking a Japanese ship, the destroyer Kisaragi. The Grumman fighter planes flown by VMA-211 were not intended to be used as attack aircraft, which made this sinking all the more remarkable.  The Kisaragi was the first Japanese warship sunk by an American airplane during the war.

After all of VMA-211’s planes had been destroyed or damaged beyond repair, Elrod organized ground troops for a defense of a stretch of Wake Island’s shoreline. He was killed in combat with Japanese troops invading the island on December 23, 1941.

For his heroism, Maj. Elrod was posthumously awarded the Medal of Honor, America’s highest military honor. The award was presented to his widow on November 8, 1946.

His Medal of Honor citation reads:

For conspicuous gallantry and intrepidity at the risk of his life above and beyond the call of duty while attached to Marine Fighting Squadron 211, during action against enemy Japanese land, surface and aerial units at Wake Island, 8-23 December 1941. Engaging vastly superior forces of enemy bombers and warships on 9 and 12 December, Capt. Elrod shot down two of a flight of 22 hostile planes and, executing repeated bombing and strafing runs at extremely low altitude and close range, succeeded in inflicting deadly damage upon a large Japanese vessel, thereby sinking the first major warship to be destroyed by small-caliber bombs delivered from a fighter-type aircraft. When his plane was disabled by hostile fire and no other ships were operative, Capt. Elrod assumed command of one flank of the line set up in defiance of the enemy landing and, conducting a brilliant defense, enabled his men to hold their positions and repulse intense hostile fusillades to provide covering fire for unarmed ammunition carriers. Capturing an automatic weapon during one enemy rush in force, he gave his own firearm to one of his men and fought on vigorously against the Japanese. Responsible in a large measure for the strength of his sector's gallant resistance, on 23 December, Capt. Elrod led his men with bold aggressiveness until he fell, mortally wounded. His superb skill as a pilot, daring leadership, and unswerving devotion to duty distinguished him among the defenders of Wake Island, and his valiant conduct reflects the highest credit upon himself and the U.S. Naval Service. He gallantly gave his life for his country.