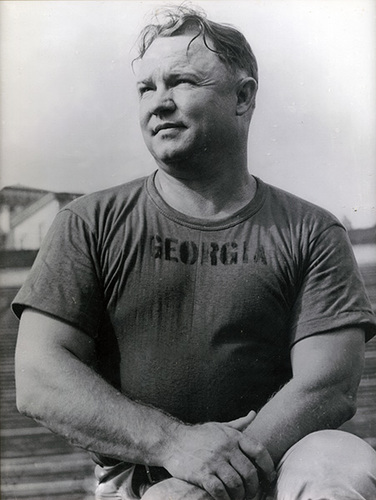 “Coach Butts is a round faced Georgia Cracker himself and he speaks the language of the men he is schooling. The Bulldogs may – and certainly do – lack experiences and skill, but they will not lack condition and a knowledge of fundamentals; not as long as the man Butts is the head knocker. It is his gridiron religion and it will be until a better one can be found.” Atlanta Journal, Sept 17, 1940

James Wallace Butts, Jr. (February 7, 1905- December 17, 1973) was affectionately known as “the Little Round Man” for his diminutive frame and “the Bowl Master” for his coaching acumen, but to most he was simply known as “Wally”.  A graduate of Mercer University in Macon, GA, where he played football, baseball, and basketball, Butts began his coaching career on the high school level.  He coached Madison (GA) A&M from 1928 through 1931, Georgia Military College in Milledgeville from 1932 through 1934, and Male High in Louisville, KY from 1935 through 1937. While at the high school level, Butts honed the sophisticated pass-oriented offenses for which he would become renowned. During those ten years coaching high school, he only lost ten games.

Wally Butts arrived at the University of Georgia from Male High as an assistant on the staff of Joel Hunt. Hunt’s tenure at Georgia would last only one mediocre year and he was replaced by Butts, whose first task was to rebuild a team with some talent but little depth.  By extensively recruiting Ohio and Pennsylvania, the hotbeds of high school football in the 1930s and 1940s, as well as finding talented Georgia athletes, Butts was able to rebuild the Bulldogs into a deep and powerful team, ultimately resulting in the 1942 team which went 11-1 and defeated UCLA in the Rose Bowl to win a consensus national championship.  Holding the program together during the 1943 and 1944 seasons while fielding teams of men ineligible for the military due to health or age, Butts was able to rebuild after the war, taking the 1946 team and its star Charley Trippi through an undefeated season and a first place ranking in one of the major polls of that time.

Wally Butts was married to Winifred Taylor and together they had three children, Fay, Jean, and Nancy. Though he was known to be a fierce taskmaster on the field, Butts was, according to his daughter Jean, a “pussycat around the house”. He would often indulge neighborhood children with treats of ice cream and was especially devoted to his dog, Rip.  A day after entertaining his visiting grandchildren with games, Wally Butts passed away from a heart attack suffered after taking a walk.  He is buried in Oconee Hill Cemetery, behind the stadium that saw his greatest days on the gridiron.