How Many National Championships?

Fifteen championship banners fly over Sanford Stadium.  Thirteen of these banners stand for the Southeastern Conference championships won by the Georgia Bulldogs.  Two of the banners represent national championships won by the Bulldogs: one banner for 1942 and the other for 1980.  These banners don’t tell all about the Bulldogs’ championship history, though, as there are four other years in which the program was named as national champions by one or more polls. The following will examine each of the seasons when the University of Georgia football team's was named no. 1 in a poll recognized by the NCAA. 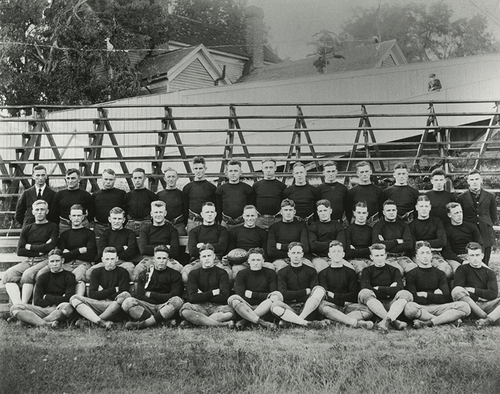 1920 – Alex Cunningham built the Georgia football program from almost total irrelevance on campus to a regionally respected program during his tenure as head coach, which ran from 1910 through 1919 (with time off for America’s involvement in WWI).  He resigned as head coach following the ’19 season in order to reenlist in the U.S. Army.  Herman Stegeman was hired following Cunningham's departure and took over a program that boasted a number of returning starters, including star players Artie Pew, ‘Bum’ Day, Owen Reynolds, and ‘Puss’ Whelchel.   The Wildcats, as they were officially known until they changed the nickname to the now familiar Bulldogs half-way through the season, cruised through the schedule with only Oglethorpe (3 points) and Alabama (14 points) managing to score.  Marring the perfect season, though, was a 0-0 defensive struggle against Virginia in Charlottesville. The Wildcats/Bulldogs were named co-champions of the Southern Intercollegiate Athletics Association along with Georgia Tech and Tulane.  Georgia Tech, having lost a game to Pittsburgh to finish with an 8-1 overall record, was named the ‘Champions of the South’ by the Atlanta Journal, ignoring the record of the team from Athens.

California, which is the concensus national champion for 1920, played this schedule:

1927 – Nicknamed the ‘Dream and Wonder’ team, the 1927 Bulldogs squad was among the most powerful and talented fielded by the University up to that point in the program’s history.  The 1927 team boasted a deep and experienced backfield (so deep that the backfield was given the nickname the ‘Thousand Backs’) that led the team to a blowout 32-0 win in the season opener against Southern Conference rival Virginia.  The ‘Thousand Backs’ then traveled to New Haven, Connecticut for a game against rival Yale, triumphing 14-10 and handing Yale its only loss of the season. The season ending game against Georgia Tech would have potentially sent Georgia to its first ever Rose Bowl game and a national title, but the playing surface at Grant Field was well-watered and very muddy, which favored Tech’s heavier line against Georgia’s stable of speedy backs.  The 0-12 loss ended any Rose Bowl aspirations for the Bulldogs.  This loss and the controversy surrounding the conditions of the field spurred on efforts to finance and build a modern football stadium in Athens, which would result in the construction of Sanford Stadium.

Illinois, the concensus national champion for 1927, played this schedule: 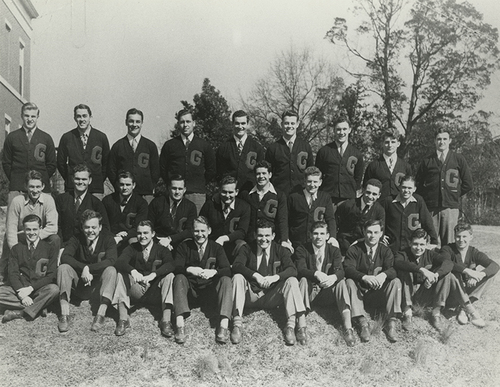 1942 – The story of the 1942 Bulldogs team is well known:  led by Heisman Trophy winner Frank Sinkwich and his backfield mate Charley Trippi, the team rolled over its competition and overcame a late-season loss to Auburn to earn a Rose Bowl bid, where it defeated UCLA 9-0.

At the end of the season, Ohio State was named as national champions by the Associated Press.  Since the Associated Press poll was -- and has -- been considered the poll of record since first appearing in 1936, Ohio State is considered to be the champions for that year.  It should be noted that the final AP poll of the season was issued immediately after the last regular season games were played, so therefore bowl games were not a factor in its rankings.  The 1942 Georgia team was or has been (in the case of polls that determine retroactive historic national champions) named national champions by eight NCAA recognized polls:  Berryman QPRS, Billingsley Report, the DeVold System, the Houlgate System, Litkenhous, Poling System, Sagarin Ratings System, and the Williamson System.  The Sagarin (ELO-Chess) mathematical system, which is a second ratings system developed by mathematician Jeff Sagarin and adopted from a system used to rank the relative differences in skill between chess players, has also named the ’42 Bulldogs as national champions.

Georgia fans celebrating on Bourbon St. in New Orleans in the early morning hours of January 2, 1981 would have said that UGA had just won its first ever national championship…and at the time they were correct, from a certain point of view.  The University of Georgia wouldn’t officially claim the 1942 championship until the 1990s, when Athletic Director Vince Dooley initiated a review of the records from 1942 and decided that winning a consensus of the polls in use, as well as the historic polls, allowed Georgia to reasonably claim the national championship for that year.  So, though the 1942 team was not named as national champion in their own year, that title was retroactively claimed by UGA. The title for 1942 is still claimed outright by Ohio State.

Tha AP Poll winning Ohio State Buckeyes, led by coach Paul Brown, played one less regular season game than the Bulldogs and did not play in a bowl game. Their schedule (along with weekly AP Poll position) 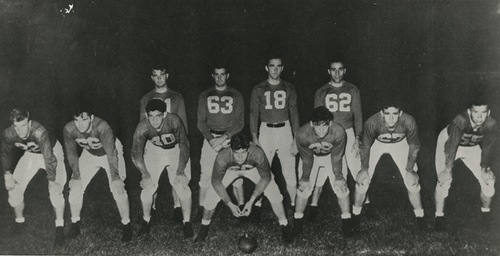 The 1946 Bulldogs, one of only three unbeaten, untied teams in school history

1946 – For most of the 1946 season, Notre Dame and Army were touted as the best teams in the country and that their meeting on November 9th of that year in Yankee Stadium would determine the national championship.  With an immense amount of publicity and with four players who either had or would win the Heisman trophy on the field, the Fighting Irish and the Cadets played to a turnover and penalty ridden 0-0 tie.  After this game, Army would defeat no. 5 Penn 34-7 and then struggle to beat rival Navy, which would finish the season with a 1-8 record, 21-18.  Notre Dame would finish their season by beating 3-7 Tulane (which was an SEC school at this time) 41-0 and then no. 16 USC 26-6.  Meanwhile, Georgia, led by all-around star player Charley Trippi, finished the regular season with a 10-0 record, which included wins over no. 19 Kentucky, no. 15 Alabama, and no. 7 Georgia Tech.

Neither Army nor Notre Dame participated in bowl games after that season, while Georgia defeated no. 9 North Carolina 20-10 in the Sugar Bowl.  North Carolina, led by their star back Charlie ‘Choo Choo’ Justice, had only one loss on the season, to no. 10 Tennessee, and had won the Southern Conference. (UNC had also tied VPI to open the year.)

The AP poll, which, as was noted above, was issued immediately after the regular season ended and did not take into account bowl games, ranked Georgia third behind national champions Notre Dame and second ranked Army.  Of the top ten teams in that final poll, only Georgia and UCLA (ranked no. 4) were unbeaten and untied.  UCLA would lose its match-up with 8-2 (6-1 Big Ten) Illinois in the Rose Bowl 45-14, leaving Georgia the only unbeaten, untied team in the country for 1946.

While Notre Dame tied Army, they did play a challenging schedule in 1946 (with weekly AP Poll position):

1968 – The 1968 Bulldogs were talented, but an odd choice to end the year with a claim to a national title.  The Bulldogs, in their fifth season under head coach Vince Dooley, opened their schedule with a controversial 17-17 tie against no. 9 Tennessee.  The controversy stemmed from a last-minute Tennessee touchdown pass that was ruled complete despite having hit the artificial turf before bouncing into the receivers’ hands.  Another tie followed in the seventh game of the season against a powerful Houston team.  The Cougars ranked first nationally in total offense, but lost three fumbles to help keep the Bulldogs in the game.  The Bulldogs ended the season with an 8-0-2 record and an SEC championship, Dooley’s second SEC title in three seasons.  The Bulldogs would take on no. 9 Arkansas, then a member of the Southwest Conference, in the Sugar Bowl on January 1, 1969.  The Arkansas defense harried the Bulldogs all day and took a 16-2 win.

The 1968 season would be the first time that the Associate Press issued its poll after the bowl games had been played.  At the conclusion of the regular season, the Bulldogs were ranked no. 4 in the country, behind Ohio State, USC, and Penn State.  The loss to Arkansas knocked the Bulldogs down to no. 8 in the final poll, behind national champion Ohio State, Penn State, Texas, USC, Notre Dame, and Arkansas.  However, the Liktenhous poll ranked Georgia as the number one team in the country following the season.  The Litkenhous system was a “difference-by-score formula developed by Edward E. Litkenhous, a professor of chemical engineering at Vanderbilt, and his brother Frank” and was in use from 1934-1984.

Woody Hayes led his Buckeyes through a challenging schedule to an undefeated season (with weekly AP Poll position): 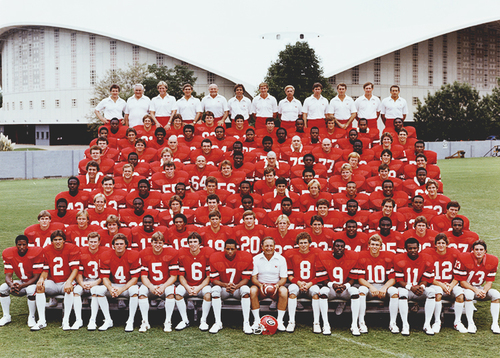 1980 – There can be no doubt about Georgia’s 1980 national championship season, as the Bulldogs were the only unbeaten and untied team in the country at the end of the year.  The Dawgs started the season at no. 16 in the AP Poll, with an experienced defense led by Scott Woerner and Frank Ros, and a tough offense led by Buck Belue.  Georgia was coming off of a disappointing 6-5 campaign in 1979 and had questions at running back, with rarely-used backs Donnie McMickens and Carnie Norris being joined in the backfield by true freshman Herschel Walker.

As Georgia fans – and all of college football – would soon find out, Herschel was not only a difference maker at tailback, but the best ever to play the position.  His transcendent talent, added to a tough, experienced team, powered Georgia through an unbeaten season, one of only three in school history (the others taking place in 1896 and the previously mentioned 1946).

After a tough 17-10 win over no. 7 Notre Dame in the Sugar Bowl, the Bulldogs ended the season with 58 ½ out of a possible 63 first place votes in the AP poll, the only time that the Dawgs have ended the season ranked no. 1 in the AP Poll.  Second ranked Pittsburgh (3 ½ votes) and fifth place Florida State (1 vote) were the only other teams to receive first place votes in the final AP poll.

*The source for the Final National Polls is the NCAA Football Subdivision Record book, which is freely available online at: