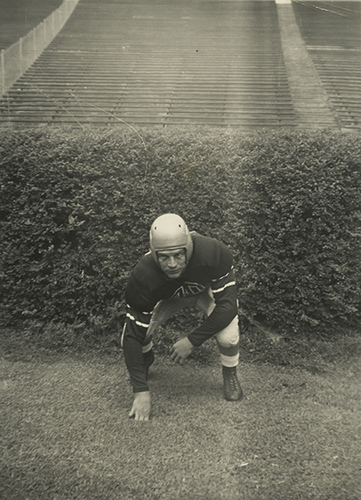 A native of Bostwick in Morgan County, GA, Henry Walter ‘Chief’ Ruark was a two-sport athlete at UGA, lettering in both football and baseball.  It was on the gridiron that Ruark found his greatest fame as an athlete, winning All-SEC honors at guard in 1941 and 1942 and being named Co-Captain of the 1942 Georgia Bulldogs team along with star running back (and future Heisman Trophy winner) Frank Sinkwich.  Ruark anchored the line that led Georgia to an 11-1 record and a victory over UCLA in the Rose Bowl.

After the Rose Bowl, Ruark entered the U.S. Army and was eventually promoted to Master Sergeant.  While at Fort Benning for basic infantry training, Ruark played on one of the football teams that were formed to provide entertainment and physical training the men on the base.  After his training at Fort Benning, Ruark served in Europe with the 47th Regiment of the Ninth Infantry Division. 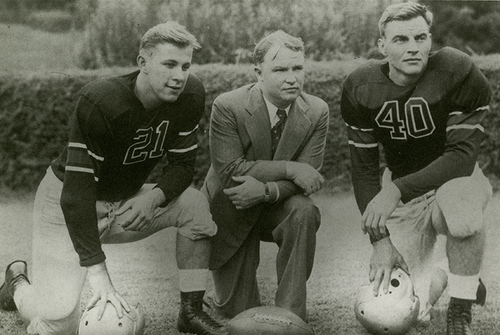 In Belgium near the Hürtgen Forest on November 24, 1944, Ruark volunteered to lead a patrol to engage German snipers who were inflicting casualties on American soldiers in the area.  Taking the lead of the patrol so as to not expose his men needlessly to danger, Ruark was killed by one of the snipers he and his men were tasked with eliminating.  For his selflessness and bravery, he was awarded the Silver Star.  His death at the age of 26 left his wife, Hazel Bracket Ruark, a University of Georgia student, a widow. Their daughter, Pat, was born after ‘Chief’ had gone off to war and never met her father.