I'm glad I lived to see it [integration]. It makes me so happy to see these young Black athletes fully satisfied and happy at Georgia. 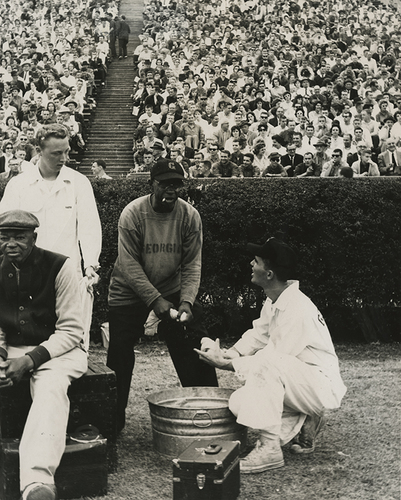 Despite being barred from playing for the Bulldogs until the 1960s, Pleas 'Clegg' Starks and Harry ‘Squab' Jones, along with hundreds of other Black support and administrative staff, facilities workers, and grounds keepers, worked with pride and dignity in the roles that were open to them during the decades before they were allowed full and equal access to the educational and athletics opportunities. 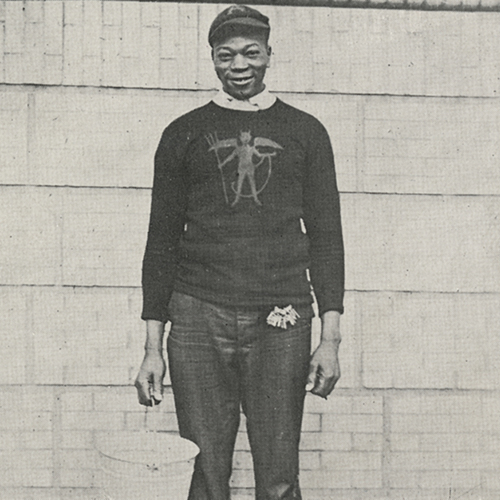 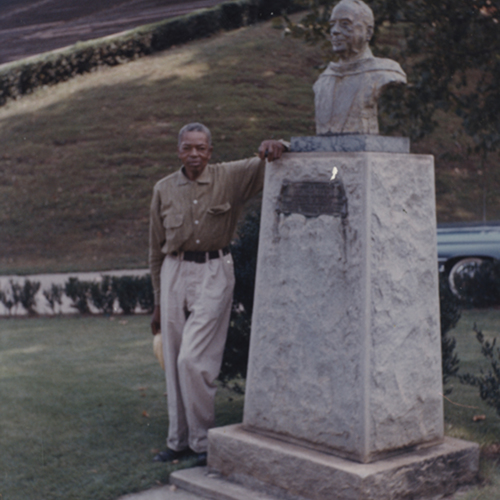 'Clegg' posing with a bust of Steadman Sanford in Sanford Stadium, early 1960s.

Clegg filled a variety of roles for the Georgia football team: from dispensing water to players during games and practice, to making certain that the players’ equipment was available, to giving advice and support.

Although segregation kept him from participating in athletics at Georgia in a non-support role, Clegg was an accomplished athlete. He was a star pitcher for the Athens Red Sox and once beat Negro League legend and Major League Baseball Hall of Fame inductee Satchel Paige in a Negro All-Star baseball game in Charleston, SC. Clegg was renowned for his ability to throw a football 100-yards. He would sometimes do this as halftime entertainment during Georgia's home football games, oftentimes while dressed in a red and black satin outfit supplied by the coaches.

Clegg remained employed with the Georgia Athletic Department until his death. His funeral on December 14, 1964 at Mt. Pleasant Baptist Church in Athens was integrated; former coaches, players, and University administrators attended the service to pay their respects to a man referred to throughout his life as a "water boy".

Pleas "Clegg" Starks is buried at Historic Brooklyn Cemetery near the UGA campus. Currently, the Wally's Boys, a group of Georgia football lettermen who played for Wally Butts during the 1950s, are working to preserve Clegg's grave, including having a new marker commissioned in his honor. Clegg was named to the inaugural class of the Athens Athletic Hall of Fame in 2000. 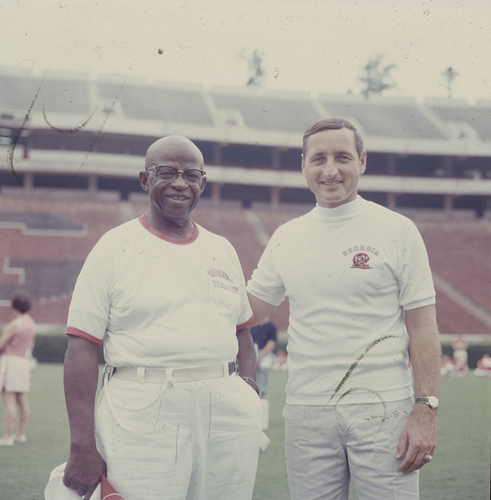 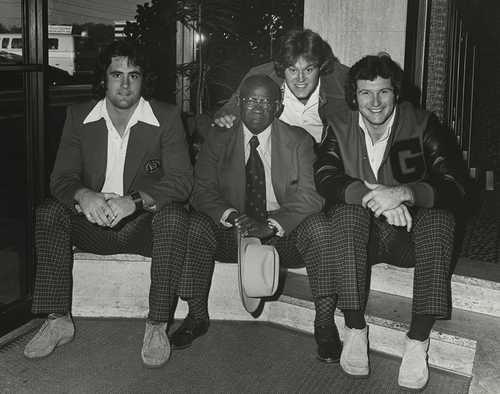 "They used to call me a water boy, but now I'm the fluid man."

Along with Clegg, Harry "Squab" Jones was associated with athletics at Georgia from his youth through the end of his life.

Jones began working with Georgia football as a young boy around 1910. He later joined the famed 10th U.S. Cavalry Regiment, participating in actions on the Mexican border before World War I and continuing to serve during America's involvement in World War I.

Though Squab’s association with Georgia athletics lasted decades, he was never formally employed by the University. He maintained his own career as a postman, but worked with Georgia’s football teams and, for a while, the Atlanta Falcons, in a variety of support roles.

Squab was also a key organizer for Black athletics in Athens. He was a founder of the Athens Red Sox baseball team and also managed it.

It was through his constant squabbling with umpires that he earned his nickname. Squab was also able to supply his team with equipment in part from used equipment he obtained from his association with Georgia's athletics teams.

Squab was an advisor and confidant to Coach Dooley during Dooley’s time as head football coach, but especially during the integration of the team. Dooley relied on Squab’s experience and perspective when dealing with issues relating to bringing Black players into the program. He advised Dooley and Redcoat Band Director Roger Dancz on removing the song ‘Dixie’ from the band’s repertoire and in dropping the word Dixie from the band’s name.

Squab Jones passed on January 7, 1990. He left a legacy of respect from the players and coaches he worked alongside, but especially from Coach Dooley:

I know that I could not have gotten along these past twenty-five years without Squab. He performed many important and varied services to the program for my twenty-five years and was my special confidant in many decisions that I had to make in the past quarter century.

← Minority Head Coaches
"Trying to Get to Tim and Me": A Melee at Georgia Tech →
Pleas 'Clegg' Starks and Harry Wesley 'Squab' Jones