Football and Masculinity in the 19th Century

On the Georgia team, every man went into the game to win or die.... 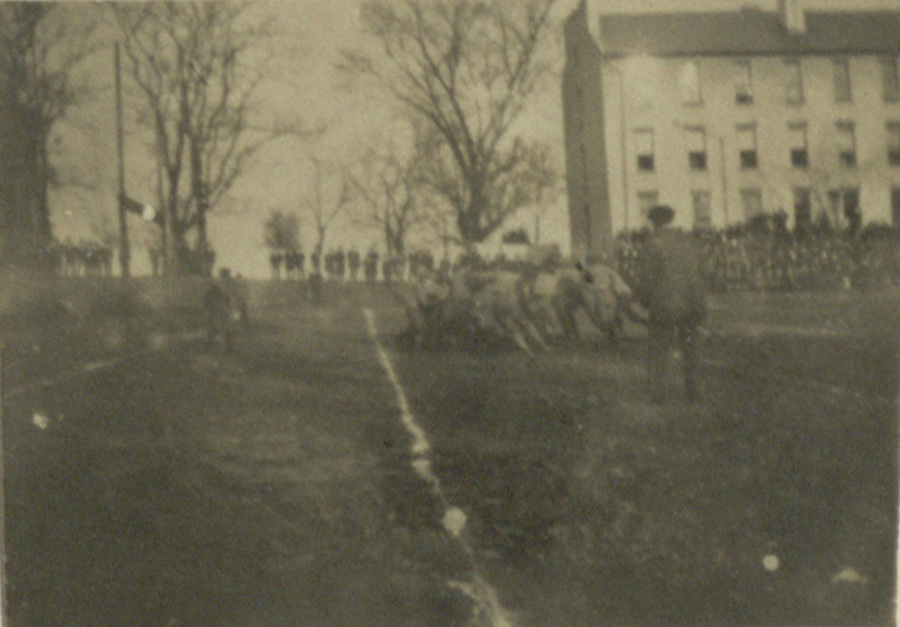 Football game on Herty Field, 1898 or 1899.  This photograph shows a scrum typical to play of this era.  Mass formations and wedge formations led to increasing national concern over the safety of the sport during this time, leading to rules changes aimed at making the game safer for participants and gameplay more open.

As football grew in popularity in the decades after the Civil War, reporters, fans, coaches, and players discussed the game in a masculine manner. Oftentimes, this meant associating football with a martial legacy. In the most literal sense, football resembled warfare with its style of play – where men lined up in organized formations with the goal of capturing territory while using physical force.  Sportswriters were crucial in amplifying militaristic language to a broad audience, likening the gridiron to a battlefield, players to warriors, and wins to honorable victories. The rise of college football coincided with several military conflicts, including the Spanish-American War in 1898 and the United States’ entry into World War One in 1917.

In addition to its connection to warfare, football was also credited as a “man-making” sport. During the 1890s and 1900s, Americans embraced scientific reasoning, strength and fitness, and glorifying healthy bodies. Although football emphasized the quest for physical perfection, it also guided men toward moral perfection. Especially in its early, controversial decades, the sport’s advocates argued that football led men down an ideal path rather than a dangerous one. They maintained that players gave up drinking, smoking, poor diets and sleep schedules, and rowdy behavior to keep their place on the team, and thus transformed themselves into gentlemen.

John Heisman, who coached at Georgia Tech and other southern schools before the First World War, told the Atlanta Constitution in 1904 that football taught a player self-control, sportsmanship, fair play, humility, and patriotism. “It teaches him that it is a good thing to have something to stand by, to swear by, and to fight for,” Heisman noted, adding that he received letters from former players who shared their “realization of the immense benefit the sport proved to them physically, mentally and morally.”[1] While football took on a masculine tone because the sport produced muscular, physically fit football-warriors, it defined itself as an activity that produced strong men of character, too.