The Vanderbilt men seem to be independent of the inspiration of the fairer sex…Athens is far superior to Nashville in this respect, as the ‘Lucy Cobb’ and ‘Home School’ have become almost as essential to the game here as the referee and umpire. 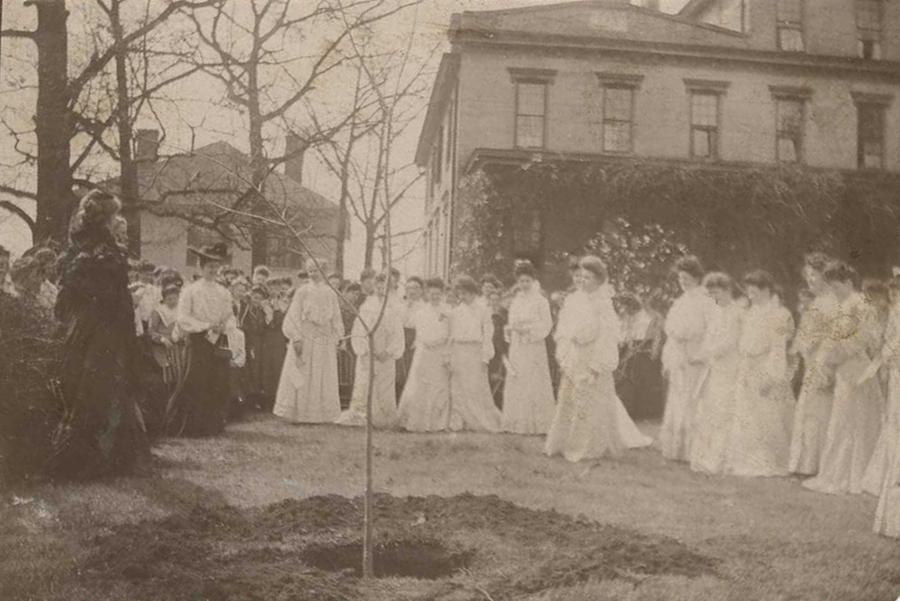 Students of the Lucy Cobb Institute, 1904

Although many aspects of college football were similar in the North and South, universities below the Mason-Dixon adopted the concept of female athletic sponsors. Taking up the sidelines alongside newfound teams in the 1890s, sponsors added a dimension of cultural spectacle at games, while also reinforcing traditional gender roles that were the custom in the region before World War One. Georgia sponsors hailed from around the state, and oftentimes were students at the Lucy Cobb School in Athens.

Sponsors were not cheer leaders – only male students assumed that post during football’s first decades, literally leading the crowd with strategic cheers. Rather, sponsors acted in ceremonial and social fashion, wearing university buttons and pins, riding carriages (and later automobiles) dressed in college colors, and passively watching the game. Sometimes, sponsors awarded trophies or gave speeches at matches, but mostly their role was limited to smiling, cheering, and waving to the fans. Football players saw the women as honorable, beautiful, and a tangible reason to win games. Georgia baseball teams also hosted sponsors during this era.

Newspapers around the state documented Georgia and opponents’ athletic sponsors in society pages each week, promoting the women’s place at football outings. The Athens Daily Banner, for example, described two Georgia sponsors for its game versus Auburn in 1899. “Both of these young ladies are reckoned among Georgia’s fairest beauties, and are social leaders in their respective homes,” the newspaper recalled. On occasion, male escorts accompanied sponsors. Frequently, these men were well-known University of Georgia students, as was one of the escorts for the 1899 match who was “easily of the most popular men in the institution.”[1]