The Tech men were greeted by prolonged cheering from their supporters when they appeared on the gridiron.  But soon the Tech men were drowned out by the Georgia students when they spied their pets with the red and black jerseys and stockings come trotting to the battle ground. 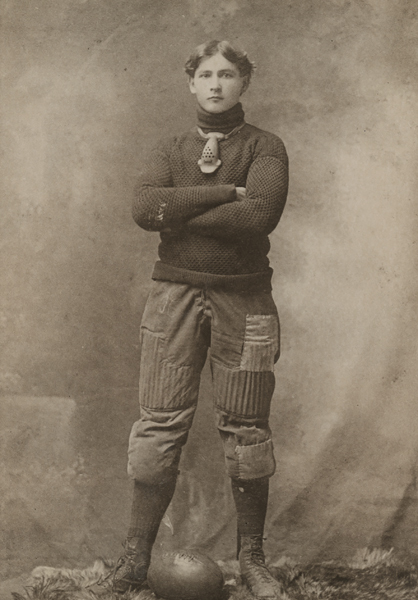 W.A. Ritchie, ca. 1899.  This is an exceptionally clear look at a type of uniform typically worn by a football player in the late 19th century. Note the metal nose guard hanging around Ritchie's neck.

There were few if any real uniform regulations enforced during the late 19th and early 20th century and most teams and players were left to their own devices in putting together their kit.  For the most part, equipment was unspecialized and was (especially during the first part of the period covered by this exhibit) issued but once per year; by the end of the season, most of the jerseys and pants had been torn and repaired several times.

While uniforms of today are designed to wick sweat away from the players' bodies and to be aerodynamic and flexible, comfort was an alien concept when putting together a uniform in the 19th and early 20th centuries.  The jersey was normally simply a thick sweater (usually wool), sometimes padded, that came down to or past the players' waistline.  An undershirt was normally worn underneath the jersey.  Players would often times wear a tightly laced canvas vest over the jersey both to make being grabbed and tackled more difficult, but also as an additional layer of protection.  Pants were merely thick work pants with a layer of padding added in key areas and sometimes quilted.  There was nothing like the high-tech athletics shoes of today; players wore heavy leather ankle boots, laced tightly, with thick cleats on the soles.  Some players would put small steel plates in the toes or ankles of the shoe as they believed that this would help them maintain stability, especially during line play.

One of the few pieces of specialized equipment during this period was the nose guard.  This was a simple piece of metal fashioned to give the wearer's nose some protection from impact.  There were small holes in the metal for ventilation, and the nose guard was tied onto the players' head by a piece of cord or thick string.  While this probably did not give the wearer much protection (as the rest of the face was left unguarded), it certainly was better than having no protection for the face at all.

The helmet was not mandatory during this period.  Helmets did exist, however, and were even sold by sporting goods companies.  These were fairly crude and were mostly made of thin layers of leather with light padding.  Most players eschewed wearing helmets altogether; it was a common practice for players to grow their hair during the season so that it would protect their head.