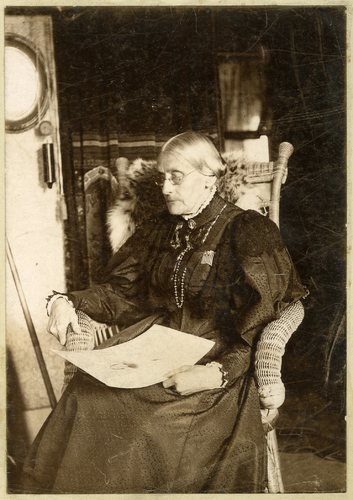 Susan B. Anthony was an American activist who crusaded for the abolition of slavery, temperance, and women’s suffrage. After she was barred from speaking at a temperance meeting in 1852, she organized the Woman’s New York State Temperance Society and refocused her efforts toward women’s rights. Alongside fellow activist and friend Elizabeth Cady Stanton, Anthony attended and spoke at women’s suffrage conferences across the country and launched the women’s rights newspaper, The Revolution.

In 1872, Susan B. Anthony cast her vote in Rochester, New York in the presidential election. For her action, intended as a test of the 14th Amendment, she was arrested for violating the state law that prohibited women from voting. Tried in federal courts for violation of the Enforcement Act of 1870, Anthony was convicted by a directed verdict and fined 100 dollars. Although the judge could have ordered her to be jailed until she paid the fine, he did not – thereby blocking her ability to file a writ of habeas corpus, the only legal avenue available for taking the case for review by the Supreme Court. 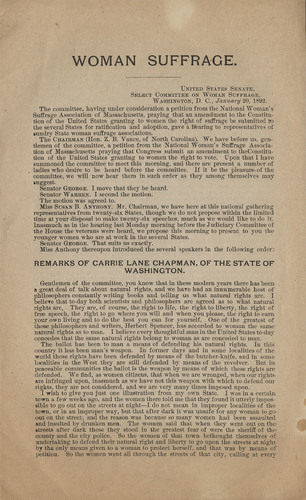 On January 20, 1892 Susan B. Anthony introduced twenty-six speakers at the United States Senate Select Committee on Woman Suffrage in Washington, D.C. She said:.

“Mr. Chairman, we have here at this national gathering representatives from twenty-six States, though we do not propose within the limited time at your disposal to make twenty-six speeches, much as we would like to do it. Inasmuch as in the hearing last Monday morning before the Judiciary Committee of the House the veterans were heard, we propose this morning to present to you the younger women who are at work in the several States.”

In the letter displayed below, Anthony writes to asks Myra Bradwell to speak at a meeting for the fortieth anniversary of the Woman Suffrage Movement, International Council of Women, assembled by the National Woman Suffrage Association, to be held at Washington, D.C. from March 25 to April 1, 1888. 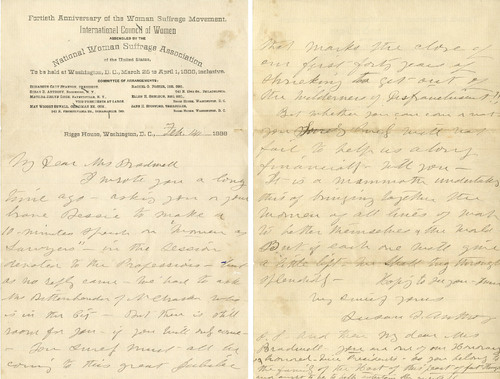 ← Global Suffrage
Assembling for Suffrage →
Rise of the Movement
Susan B. Anthony