Like all important social or cultural phenomena, the Georgia gold rush has its origin myth. This myth begins in the fall of 1828, with an Appalachian farmer named Benjamin Parks. Strolling through the hardwoods he stumbled over a rock and—bending over to look at the offending stone—noticed that it was flecked with gold. Despite efforts to hide the discovery, word quickly spread and soon thereafter the gold rush was on. 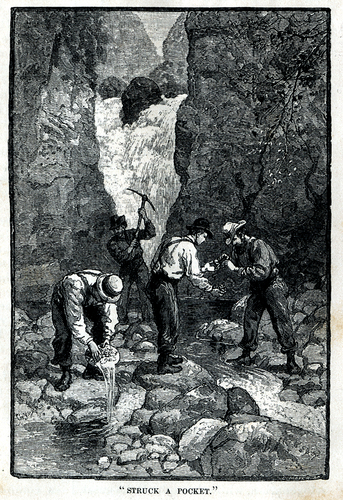 The Parks story has not gone unchallenged. A range of other claims to and about first discovery exist, crediting the find to various other local white residents, an enslaved person, a Cherokee, or a pair of English miners. Some argue that Parks found gold first, but in a different, unspecified location. The community of Villa Rica (in Carroll County) also claims to have been the first to unearth gold in the state, dating its discovery to 1826.

Whatever the true origin of the rush, prospectors flooded north Georgia, most of which was still officially Cherokee territory. Within a few months “the first genuine gold rush in American history was going full tilt.” By 1830, there were as many as ten thousand prospectors in the state, with perhaps four thousand of them lining the banks of the Yahoola River (today known as Yahoola Creek) alone. Likewise, observer Yelverton King claimed that there were “between four and five thousand men engaged in digging and searching for gold in that part of the [Cherokee] nation attached by the laws to the county of Hall.” It was a population “constantly increasing with a rapidity almost too incredible to relate.”