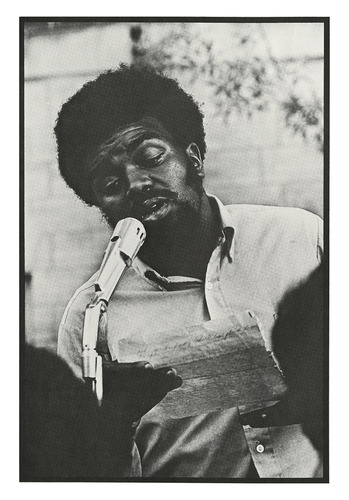 Founded in 1968, the Black Student Union (BSU) was the first student organization formed by and for Black students at the University of Georgia. Described by some early members as an “oasis”, the group created a social outlet for Black students and served as their mouthpiece for voicing collective concerns to university administrators.

BSU’s first major public action was a protest of segregated restroom facilities for staff working in the Bulldog Room, an area within the campus student center. On January 18, 1968, nine members of the BSU formed a barrier around the Bulldog Room’s cashier counter and refused to grant anyone entry until the signs designating segregated facilities were removed. This stand-in protest erupted into a physical fight between the small group of Black students and the rest of the room. After this event, the BSU began to hold monthly meetings with President Davison to discuss the needs of Black students on campus and how the administration could meet those needs.

On February 26, 1969, the group sent a list of demands to university president Fred Davison. Among other items, the group called for increased hiring of Black faculty and staff; increased recruitment and retention of Black students; and the creation of an Afro-American and African Studies Department. 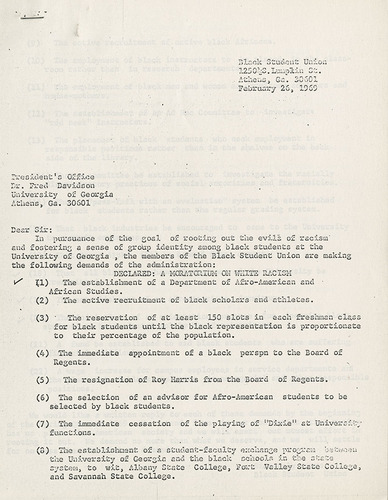 List of demands, submitted to Dr. Fred Davison, president of the University of Georgia, by the Black Student Union, February 26, 1969 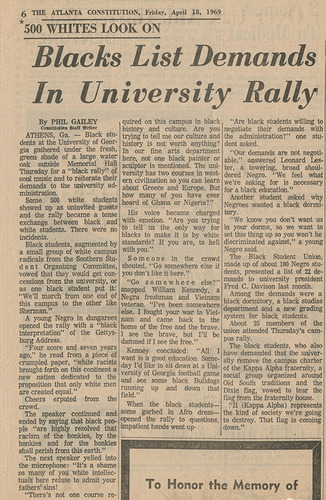 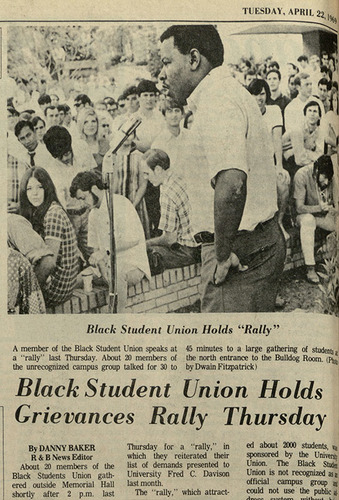 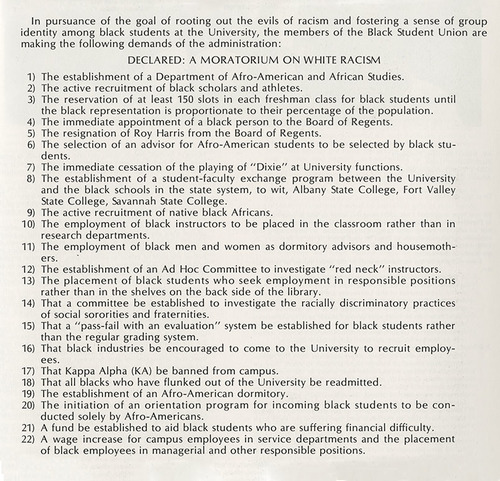 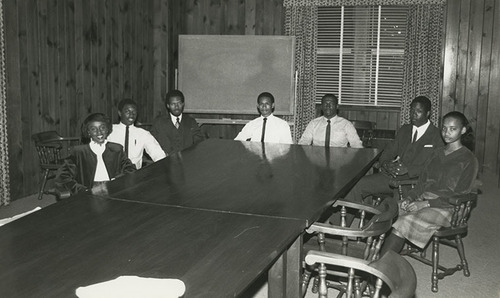 Envelope of letter, sent to Dr. Fred Davison, president of the University of Georgia, from A. Levert Hood, chief of staff, The Black Student Union, February 21, 1971 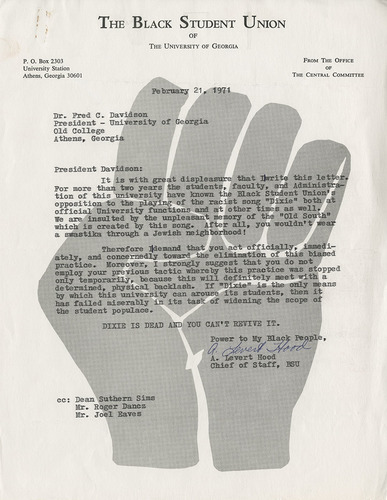 Letter, sent to Dr. Fred Davison, president of the University of Georgia, from A. Levert Hood, chief of staff, The Black Student Union, February 21, 1971

On March 8, 1969 UGA president Fred Davison issued a written response to the BSU demands. Although he addressed each listed demand, many readers felt Davison was dismissive of the group’s concerns. Meanwhile, others found the requests unrealistic, and urged Davison and other administrators not to concede to any of the demands. The administration moved quickly to create an Afro-American Studies Program and hired Ben Colbert, UGA’s first black admissions counselor, to assist with the recruitment of Black students. Other demands went unanswered, and led to subsequent public action by BSU in the years that followed. 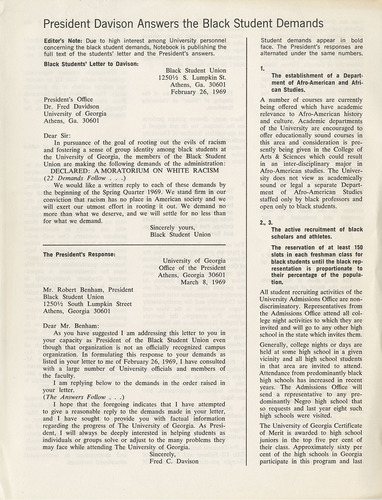 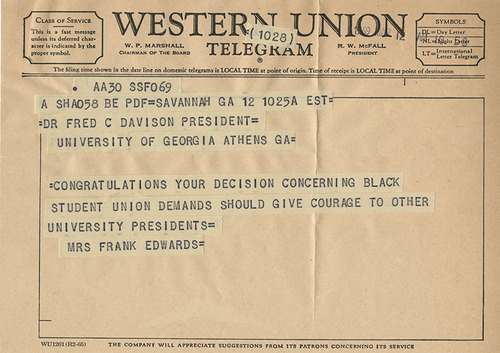 Telegram, to Dr. Fred Davison, president of the University of Georgia, from Mrs. Frank Edwards, offering congratulations on his response to the demands of Black Student Union, March 12. 1969 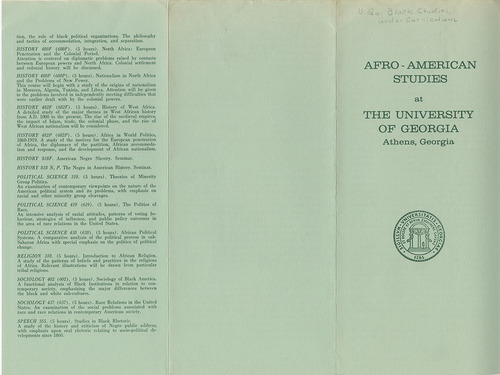 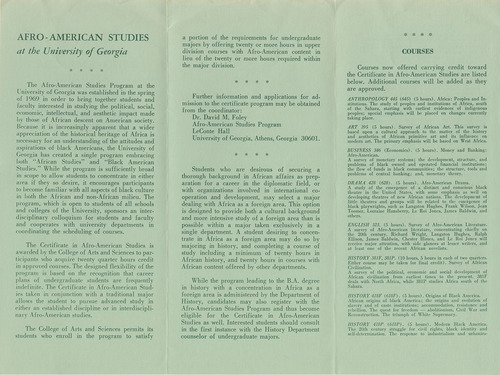 Brochure, Afro-American Studies at the University of Georgia, ca. 1970s 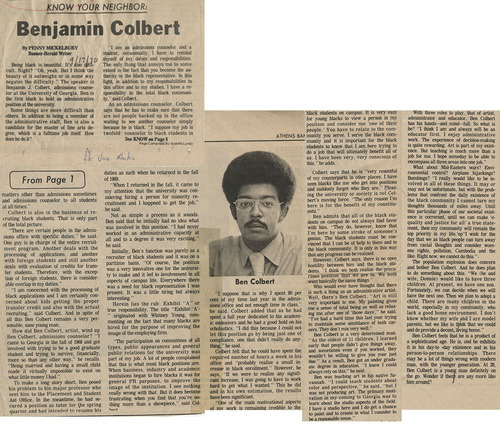 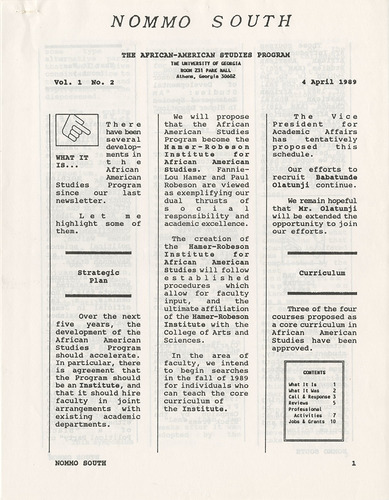 Just as Black students were fighting for space and recognition on campus, so too were the growing number of Black faculty and staff members. What began with the hosting of informal group lunches in 1980, had formalized into the Black Faculty and Staff Organization (BFSO) by January 1982. By the late 1980s, the group had begun hosting the annual program, “Forum on the Status of Blacks at UGA” and had begun publishing the Black Faculty and Staff Newsletter. 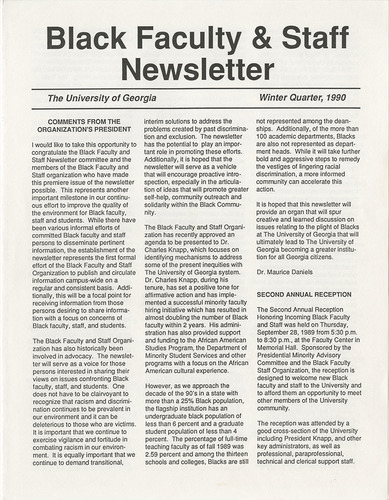 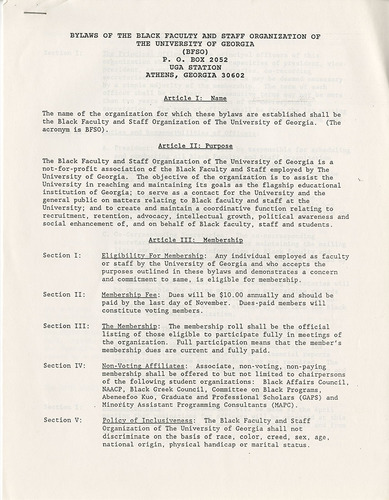 Bylaws, Black Faculty and Staff Organization of the University of Georgia, ca. 1990s

BSU continued to take on new challenges and evolve as an organization into the 1990s. After a hiatus, in June of 2020 students formed a new Black Student Union at UGA as an umbrella organization to connect Black campus groups with one another. 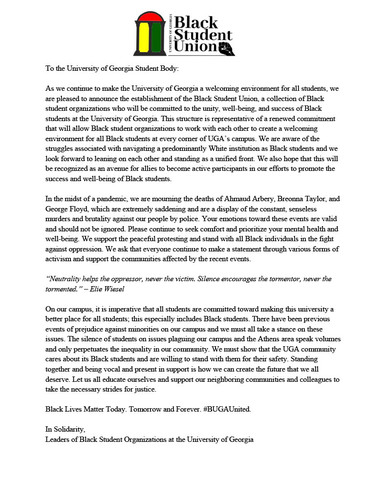 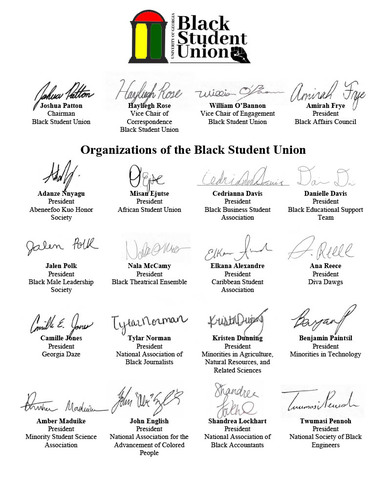 Press release and signature sheet, announcing the establishment of a new Black Student Union at UGA, 2020

BSU was not the only student group asking for change. In 1974, the Black American Law Students Association (BALSA) published a letter on the discrimination Black law students faced at UGA. The letter proposed solutions such as the hiring of more Black professors, celebration of Black legal achievements in the curriculum, and distributing scholarship funding to Black students in proportion to what their white peers received. When the School of Law ignored BALSA’s polite “lawyer-like conduct”, they turned to another lawyerly method of change, and filed suit.

Photographs, protesters at an event organized by The Black Student Union at UGA, 1974.
Pandora, 1974 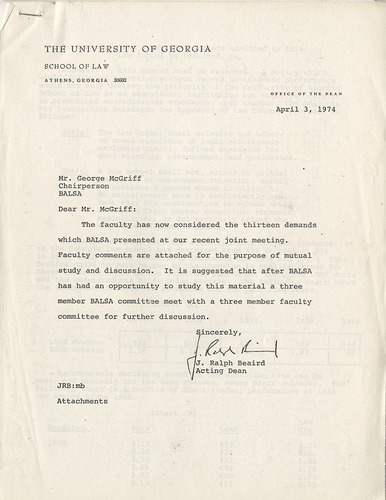 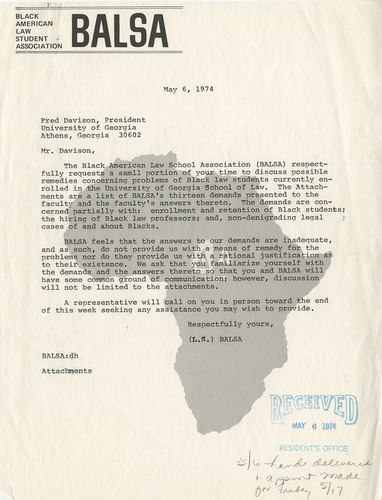 Letter, to Dr. Fred Davison, president of the University of Georgia, from BALSA, the Black American Law Student Association, May 6, 1974