John Hoard and Bill Green, the founders of the Committee on Gay Education, met in the summer of 1968 during a University-sponsored leadership summit for incoming freshmen. Both Georgia natives, they forged a friendship rooted in their common sense of humor, political interests, and sexuality. Because sodomy was illegal in Georgia and homosexuality carried a social stigma, being gay and out was not common in the 1960s. 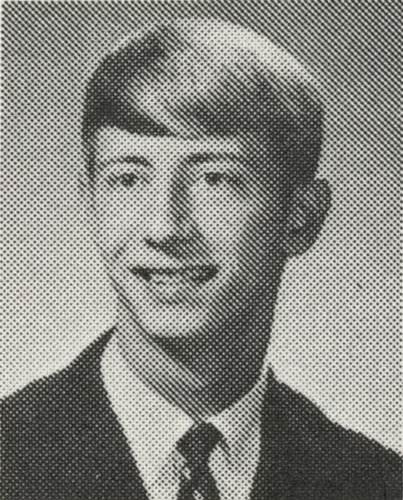 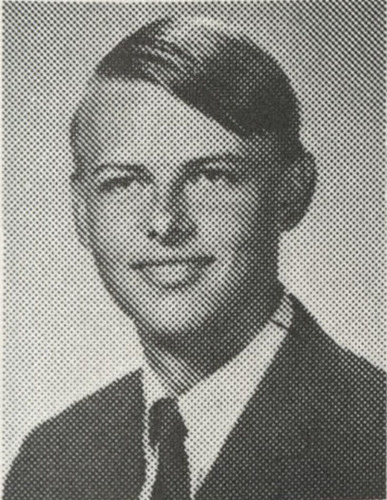 Inspired by the Stonewall Riots, Hoard and Green first discussed the idea of forming a student group in the spring of 1970. They imagined a gathering place for gay people that could also educate the public about issues in the gay community. By 1971, the now seniors were ready to move forward with their idea. After securing Dr. Karl King as a faculty advisor and promoting the organization in King’s Family Relations classes, the CGE hosted its first meeting on November 10, 1971 to a crowd of 70 people. The CGE became the first LGBT student group in Georgia. 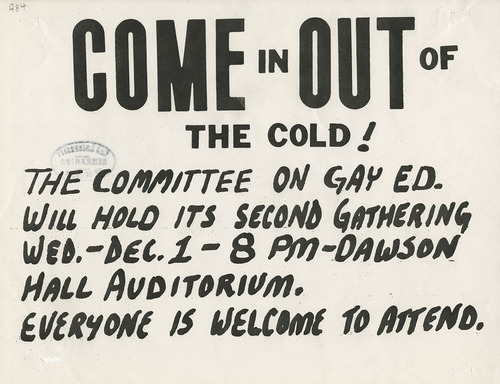 Fearful of scandal, university administrators began to document the CGE’s activities in internal correspondence. In the months that followed, UGA refused to recognize the Committee on Gay Education as an official student organization. Administrators feared that by acknowledging the group and allowing them to meet and host events on campus, the institution would be complicit in breaking Georgia’s sodomy law.

The Committee on Gay Education planned to host its first major public event, a dance, in Memorial Hall on March 10, 1972. Because the group was not a recognized student organization, it turned to fellow student group Intersect to help in reserving space on campus. 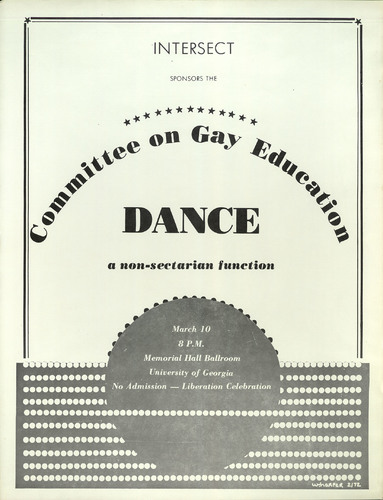 After news of the dance broke in the student newspaper, UGA placed an administrative hold on the event. The CGE and Intersect held a sit-in in the office of John Cox, director of student activities, to protest the decision. CGE members and supporters challenged the homophobic behavior of administrators in articles and opinion pieces in The Red & Black student newspaper, asking the university to “be bold enough to lead Georgia toward a future of justice and equality.”

When news broke about the dance, King resigned his post as the group’s advisor. He felt that the group had “moved out of the umbrella of education and into the arena of confrontation.” 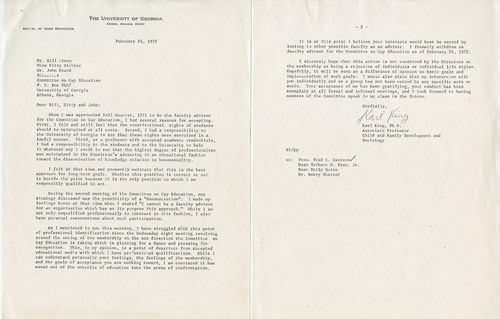 Letter, Dr. Karl King to officers of the Committee on Gay Education, February 24 1972

On Thursday, March 9, the day before the dance was to be held, CGE members Bill Green and Nick Curry along with Rick Gilberg, director of Intersect, filed an equity complaint against the University of Georgia. They requested a temporary restraining order to prevent UGA from stopping the dance. At 6:15 p.m. on March 10, Superior Court Judge James Barrow granted the order, ensuring the dance could occur just hours later.

Local band Ravenstone played at the dance, followed by a performance from legendary Atlanta drag queen Diamond Lil. Between dance attendees, onlookers, and news reporters an estimated 300 people attended the event. At the end of the night, Bill Green told the crowd “tonight was probably one of the most important events in the history of the United States...This is not a climax. This is a beginning. And it’s going to go on and on.” 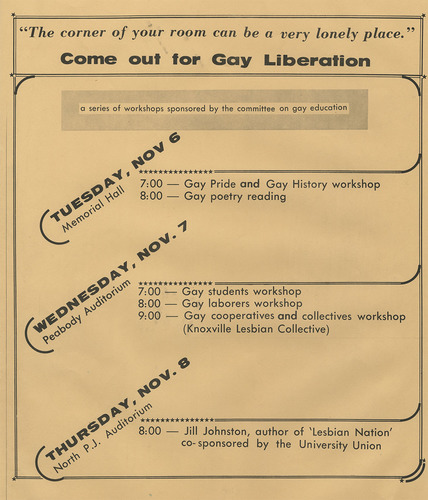 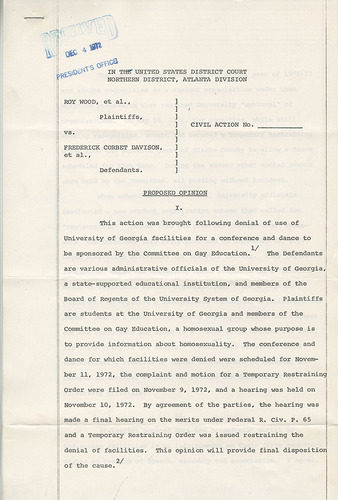 Despite the victory of the dance, CGE members and their supporters continued to face opposition on campus. When the group sought to reserve space in Fall 1972 to host the Southeast Regional Gay Coalition Conference and dance, administrators once again denied their request. After a fruitless appeal to the Board of Regents, the CGE once again took legal action against the UGA. After winning a second legal challenge, the group hosted a regional conference and another dance. CGE also organized movie nights with gay and lesbian themes, celebrated the first Pride Week in 1973, and brought Blue Jean Day to campus in 1978. 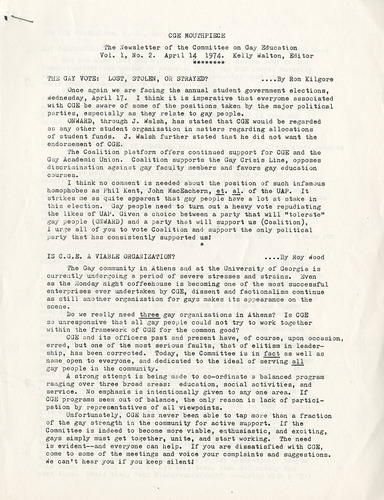 CGE member David Alonso ran for Student Government Association president in 1972 alongside other candidates who included the issue of gay rights in their campaign platforms. In 1975, Jodie O’Connell, an openly gay law student and former CGE director, became student body president of the University of Georgia.

The Committee on Gay Education ended in 1983, but the Lambda Alliance picked up its mantle and became an official student organization in 1998. In 2005 the group was renamed Lambda Alliance: UGA’s Lesbian, Gay, Bisexual, Transgender, Queer, and Asexual Student Organization. Today, the group continues as Pride Alliance supporting the LGBTQA community at UGA through education, outreach, advocacy, inclusivity, community, and racial justice work. 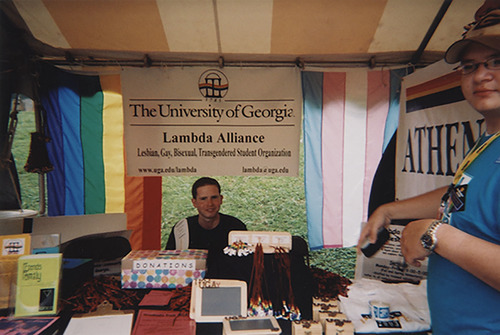 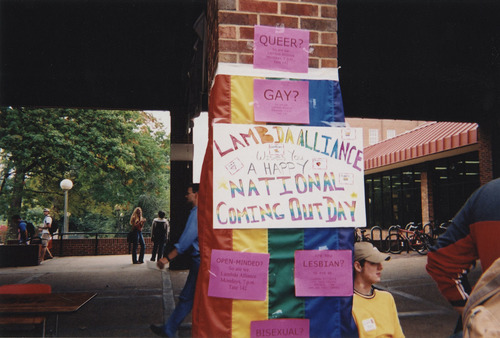 In 2005, LGBT Resource Center opened on campus. Its mission is to create an inclusive and sustainable space for self-discovery for the LGBT community at the University of Georgia. 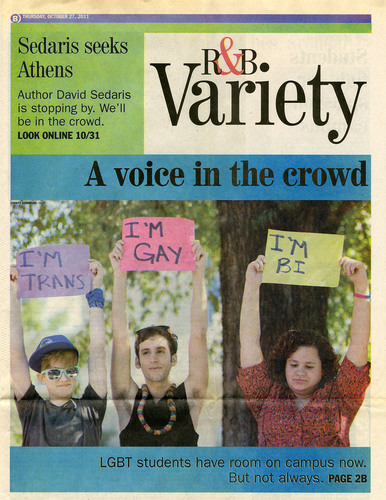 Headline, "A Voice in the Crowd: LGBT Students Have Room on Campus Now. But Not Always." The Red & Black, October 27 2011