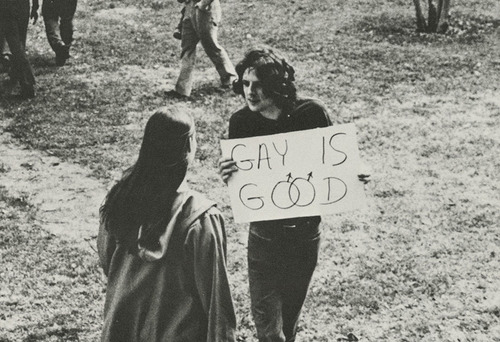 The targeted police raid of the Stonewall Inn, a gay club in New York City, on June 28, 1969 sparked six days of protests and clashes with law enforcement. These events were not the first time a group of LGBTQ+ people fought for their right to equality, but Stonewall gave change-makers national attention and sparked the start of the gay rights movement in the United States.

In 1972, LGBTQ+ students at the University of Georgia had their own turning point. In that year, the newly formed Committee on Gay Education (CGE) fought a legal battle to host the “first gay dance in the southeast.” The group would spend the next decade working to make UGA’s campus a safer space for people of all gender identities and sexual orientations.

This room explores the protest culture on college campuses during the 1960s and 1970s, and how common causes built new alliances among students. It highlights the early work of the CGE, and explores continued actions by students, faculty, and staff to create space for LGBTQ+ persons on campus in the decades that followed.